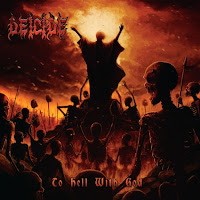 Regardless of their importance during death metal's formative years, or Glen Benton's memorable controversies, I have never found Deicide to be among the better traditional death metal acts on the international stage. Albums like Legion and Once Upon the Cross had their moments, to be sure, but despite the band's irreverence and savagery, I've never found them quite menacing enough to impress my tastes. Brutal, blunt, and blasphemous indeed, but the actual music always seemed to lack some charisma, some tangible evil inherent in the compositions of a Leprosy, Consuming Impulse or Cause of Death.

That said, I was surprisingly happy with their 2006 album The Stench of Redemption, a fact I attribute to the 'changing of the guard', the addition of axe men Jack Owen (Cannibal Corpse) and Ralph Santolla (Obituary, Death) to the fold, replacing the Hoffmans. Till Death Do Us Part not so much, but To Hell With God, with all the implicit poignancy of the title's intent, is a fairly solid whooping with some impressive musicianship in both Asheim's nuclear powered delivery and the razing whirlwind of guitars. The classic Benton dual guttural/snarl vocals are lock step with the finer offerings of the past, and the production values here might be the paramount of the entire Deicide career: incredibly clear and distinct, though the bass is admittedly pretty thin in there (but fitting).

The first few numbers arrive in a blaze, led by the titular track's showy guitar work, which we were apparently not meant to survive, so much effort and stake is placed in it. It's one of the better tracks here, followed by the punishing precision pun of "Save Your", which is sadly void of any truly redeeming riffs despite the obvious effort. "Witness of Death" conjures a slower vortex of old school riffing, but not for long, as the pace returns to that of the prior tracks with forceful death/thrashing merit, a tactic used repeatedly here through "Conviction", "Angels of Hell", and "Into the Darkness You Go". There are a few traits later in the track list, like "Servant of the Enemy" with its great leads and the slapstick "How Can You Call Yourself a God", which has some of the better guitars hidden in its tightly woven walls of brutality.

It's very easily to be overwhelmed with how good the album sounds from a technical standpoint, and the clarity of its engineering propels the guitars with some of the most brutal blunt trauma the band has ever mustered. However, aside from the obvious talent Owen and Santolla possess in their leads and the precision of the rhythms, there are very few which linger long in the mind. This has ever been the bane of the Deicide album, that falling just short of memorable, but To Hell With God does well to at least merge the band's old school aesthetics with a modern level of extremity, much in the vein of The Stench of Redemption. The musicians are all in fine shape, including Benton, but whilst I enjoyed mashing my head to a pulp for an hour or so on the hard surface of my desk, there's just not much depth outside of the skill level and pristine production.