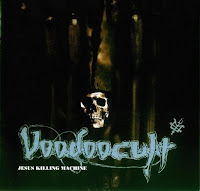 I'm sure many metalheads have fantasized what it might be like to an assemble an all-star band of their own choosing. Why, for my own such dream outfit, I'd grab the Stützer brothers (Artillery) for guitar, Martin van Drunen for vocals, Ron Royce (Coroner) on bass, and Peter Wildoer (Darkane) for drums, and let Fenriz write the lyrics while I consigned myself to the mere cowbell. Well, for German alt rocker Philip Boa, this dream became a reality, not once, but twice, through his Voodoocult project. Somehow, by way of cash bribes, solid friendship, or sorcery, Boa was able to assemble a cast of metal heroes to record Jesus Killing Machine, an album of thrash and heavy metal centered around his own lyrics.

As it turns out, Voodoocult is a fucking travesty, and one of the worst albums I've heard in all of German thrash? How, do you ask? I haven't the faintest idea what went wrong. Boa has hired himself the talents of Dave Lombardo (Slayer), Waldemar Sorychta (Grip Inc., Despair), Mille Petrozza (Kreator), Chuck Schuldiner (Death) and the lesser known Gabby Abularch of the crossover outfit the Cro-Mags, and written an album that drizzles with mediocrity. Actually, I do not deign to give it even that much credit. Jesus Killing Machine is pure shit, about as shit as album can get before mutating into compost. I would never in my life thought that this much talent could be gathered in one place and produce so little of merit. So I blame it all on Philip Boa, because he let what might have been a metallic miracle slip through his fingers like yesterday's rain.

I'll be clear: the fault here lies not with the individual performances or the production of the debut, but in the sheer execution. These songs suck. The vocals. The lyrics. The riffs. Rarely before have I heard such a vapid stockpile of ineffectual guitars, much less on a thrash metal recording. The album is split down the middle between dull thrashers like "Killer Patrol" and "Metallized Kids" (yes....metallized kids!) and more power/heavy fare like "Death Don't Dance With Me", "Albert is a Headbanger" and "Born Bad and Sliced!". Word for word, in fact, this might just have the worst slew of song titles I've ever beheld. But aside from the hard biting of "Hellatio", there is not a single riff here worth a dime, and the abilities of all constituents are under utilized: David Lombardo playing dull, hammering drum beats? Check. Chuck Schuldiner almost entirely out to lunch? Check. Mille Petrozza's fiery axe passion? Void.

What's worse, is that Philip Boa's lyrics are so asinine here, streaming silly imagery at the worst of times and repeating himself horribly at the best ("Death Don't Dance With Me"), that it almost feels that he's making a mockery of the project. Is he some wealthy land tycoon, able to hurl money into something like this and not take it seriously? I don't know. I would like to think the man loves thrash metal, but the nasal, airy whining of his pipes was not up to task, or he was fully fucking drunk during the writing phase. Most of these songs could be improvised by even the most layman of metal musicians, so it seems rather a waste to drag such names into its stolid abyss of value. What's worse, Boa got away with it...again...a few years later!