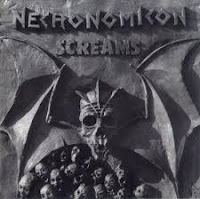 It took Necronomicon a few efforts in the 80s to finally score, with their third album Escalation, and thus it felt rather anticlimactic that they dropped off the face of the Earth for six years after that. But in 1994, they finally pulled their shit together to produce Screams, a work which sees a leap forward in studio standards, if not really a leap forward in quality. This is still a sound close to Destruction, thanks largely to the riffs and vocals of Volker Fredrich, with that same nasally aggression as Schmier, but I'd daresay that the variety in the writing here better parallels the work of his Headhunter, who infused more melody and traditional heavy metal influence into the thrashing base, and were in the midst of doing so when Screams was released.

The band had grabbed a new bassist by this point, another in a very long line of bassists (which might help explain their inconsistency in putting out albums), Bernhard Matt, but otherwise they remain the same. "Final Course", "Temptation", "Irreversible Destruction" (don't laugh), and the oddly titled "Groovy Mouth" all sound very similar to what Destruction were writing around the mid to late 80s, though the guitars are a little more blunt than Sifringer riffs, and the band uses more gang shouting alongside Volker. None are very good, but none are badly written for that matter. Where the album grows slightly in quality is where it takes you by surprise, like the moody, rising heavy metal ballad "Bitter Sweet Perversion", or the pure ballad "Ruins (They Will Cry Tomorrow"), both of which are fairly memorable, despite the more emotional vocals, the latter sounding not unlike a Scorpions piece.

The band had still come a ways since their s/t Necromonicon in 1986, but Screams is hardly a phoenix rising from the ashes. Few of the songs here are as catchy as those on Escalation, and the album seems strangely out of place in time, but this is due to the huge gulfs of time both preceding and following its release (they won't release Construction of Evil for a decade after this) which make it a curiosity. However, I'll give the German band some credit. They could have reassembled and changed their style to groove/thrash like most of the hideous bands of the day, trying to reinvent themselves, but they did no such thing. Sure, Necronomicon is derivative of another better known band, but they at least play some decent music, and the duration of their career despite a breakout success reeks of authenticity. But if it's your first exposure to their charnel charms, you're better served by Escalation or even Apocalyptic Nightmare.