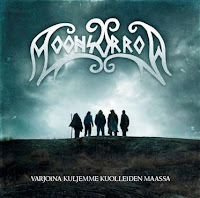 Moonsorrow is one of those folk/black metal acts who seem as if they could literally gut a reindeer on microphone and reap enormous and excessive amounts of praise for the deed, but I certainly have been snared twixt the jaws of their sound in the past. This is not a band of complexity, and it never has been, but one of aural, crushing magnitude, focsed on swaggering, plodding compositions that very often cross the dangerous threshold of 10 or more minutes of your time, and often, as in the case of 2007's V: Hävitetty, far longer than even that. The burden of keeping a listener's interesting in such conditions is a heavy one, but the Finns have succeeded before. With their 6th full-length, Varjoina Kuljemme Kuolleiden Maassa ('As Shadows We Walk in the Land of the Dead') I'm not sure the formula holds up all that well.

You know the drill by now: heavy streams of chords and rasped vocals glazed in choirs and epic synthesizer lines, occasionally transitioned into brief flights of folksier fancy, all stretched over a canvas so broad that you could probably scrawl out the Kalevala and the Poetic Edda across it in a reasonably sized font. But despite its constant power and desperation, I really did not find myself drawn into this effort until the second half, namely the 16 minute "Huuto ('The Scream')", with its gorgeous escalation of glimmering emotional resonance, and the closer "Kuolleiden Maa ('To the Land of the Dead')" which is simply intent on being the loudest crashing available on the album. The track list is actually pretty bizarre, with the band choosing to switch between 11+ minute tracks and then brief interludes that all fall around 60-90 seconds, none of which seem to do anything but brood with a few crisp, subdued samples. These are not particularly terrible, mind you, but they would have been better worked into the songs directly, because they're just too damn short to be effective of their own accord, and I doubt anyone wants to hear them in a play list, breaking up the action of glacial maneuvers that comprise the bulk of the album.

That said, I was not drawn into either "Tähdetön (Starless)" or "Muinaiset ('The Ancient Ones')" after a few spins. I recognize their bombast and measurements of aggression, but in the 23-24 minutes of their existence, I'm not sure I heard even one moment which stood as tall as the latter visions, and ultimately only "Huuto" was something I found myself anticipating. Varjoina Kuljemme Kuolleiden Maassa is mixed and layered as passionately as anything in the band's past, and it fits the mold of the sweeping, loud and steadily paced epic that the band's core fans might be seeking, indifferent to any finer layer of compulsion or composition, but this battle seems to take far too long parlaying and too little time in the actual melee, its proud warriors spending too long staring at you across an overcast landscape than razing you. The result is the least interesting Moonsorrow to date.