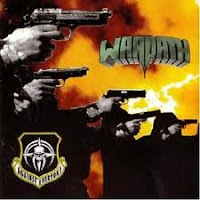 I have to give Warpath some credit. After two albums of fairly listless, mediocre meat thrash, they've evolved into some slightly more menacing, a fit of pulverizing, driven thrash that often borders on grind in places. I'm not saying I'm a fan of Against Everyone, and in fact the content is just barely as satisfying as their debut, but from a production and energy standpoint, this was a good decision. The bass is lent a ripping loudness, and the guitars batter the listener like baseball bats in the hands of some restless riot squad. There is less 'control' here, less desire to simmer in the juices of the uninspired and derivative, so it's only too sad that the actual riff writing for the album still comes up short.

The vocals still belong to Dirk Weiss, and he's using the same tone reminiscent of Cronos or, perhaps more appropriately, King Fowley of Deceased. It's certainly a better performance than either of the previous albums, and the band have tagged on just another reverb that he sounds like he's howling over the burning of city blocks. In fact, the entire album has this atmosphere, and I enjoy how they include the chanting bits of "In Rage" or the whispered, decrepit vocals in the bridge of "I Hate". The faster material like "Gate Crasher", "Mind Commits Murdr" and "Vote of Censure" is almost always superior in quality to the plodding pieces that return to the pace of Massive, so I almost feel like the band should have gone all out 100% grind + Sodom, a band which this certainly hints at in spots.

Alas, the guitars here are just so lacking in anything beyond the churning atmosphere that I found I was almost in a coma of lifeless Discharge worship. Anger abounds, but it might have been fashionable to marry it to some worthwhile notation. Instead, these riffs just bounce around in a limbo of creativity, stripped and struggling to play more than 3-4 chords with a numbing repetition. The samples and tweaks found nestled in several of the tracks thus become its only saving grace, its only diversion from the caustic ennui. Warpath have come out in force for this album, but it's a force too easily quelled by the local authorities riding bullet proof glass limos and strapped with riot shields.