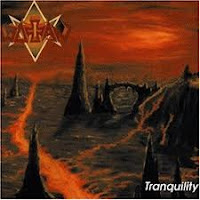 Wotan's 1996 debut definitely has a few things going for it, even if it feels out of time and place so deep in the decade. I enjoy the bleak cover art, the cheesy sci-fi synth intros to several of the songs, and the band's honest attempt at mixing the brutality of Sodom and Kreator with the more technical aspects of Vendetta and later era Deathrow. Perhaps it's not such a surprise, as this band was formed in the middle of the previous decade, recorded an album that was never released (1992), and thus mulled around with only demos for a decade, until they got a shot for an album through the obscure D&S Records.

Unfortunately, for every good riff tucked into one of these songs, there are 5-6 that are merely average. Vocalist Carsten Piszczan has a harsh, biting vocal style reminiscent of Mille, but blunter in delivery, and it doesn't have a lot of character in the end. I mentioned the synths that herald "Assassinator", "Burnt to Death" and "Incarnation", casting the obscure glow of 70s or 80s b-movie nostalgia, but all hopes that they're going to shift into premium riff territory are all too quickly dashed. Wotan are a competent lot, they play with a tight and forceful precision that celebrates that ribald German energy of the 80s, but they don't seem capable of assembling notes in the most memorable patterns, and thus the chops feel largely by the numbers here, no matter how brutal and direct the band's intent.

"Assassinator" has a couple choice Kreator-styled riffs, and the chords played in "Incarnation" recall the sort that Pestilence would have used in the late 80s, but aside from the dopey bass pep in "Bring it to an End", there is too little variation here. The band's not hostile enough to get by on sheer speed and blistering violence like a Dark Angel, nor charismatic enough to compare with the Big Three or Tankard. Ultimately I came off from Tranquility feeling like, here were a group of guys who 'got it', but then failed to translate this good taste in quality thrash to a worthy statement of their own design. What might have been a freakish scenario of psycho holocaust sci-fi/socially aware thrashing is nothing more than a 45 minute tour of untapped potential.