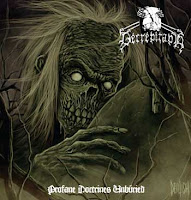 Some people work 40 hours or more each week. Some people just spend 40 hours each week watching their investments on an iPad while they sip martinis by the pool on their private yacht. But some, rarer specimens spend about 80 hours per week laying out drum tracks for brutal, old school death metal albums. Alright, maybe just one individual: Elektrokutioner, who returns to Decrepitaph with multi-instrumentalist/vocalist Sinworm to produce yet another tour of the morgues and sepulchers of puerile antiquity. Profane Doctrines Unburied is the third full-length from this project, and it picks up directly where the Conjuring Chaos EP and previous efforts left off, in the sullen murk and decay of a genre that still writhes like a pile of corpse-worms just beneath the surface soil of the present.

Intricacy is not the mindset here, but thudding riffs and percussion that compete for guttural space with Sinworm's entirely blunt invocations of rotting flesh and morbid ritual. Like the past albums, you'll hear traces from a wealth of archaic influences like late 80s Obituary, Deicide, Pestilence, Autopsy, Incantation and so forth, spliced with some resonant, creepy doom melodies in "Desecrate Sacred Flesh" or "A Suffocating Evil". Like Condemned Cathedral or Beyond the Cursed Tombs, this seems to be a rather well rounded effort without the strength of distinct, individual tracks, so its best left to those times in which you commit 50 minutes to festering, overbearing gloom and bludgeoning evil, without even the illusion of hope. Personally I found the deeper I traveled into the content here, the more hypnotic the experience would become, as if my corpulent form was being used as the focus of some foul summoning act. It seems to climax around "Mortified Spirits" and "Domain of the Occult", but it's also 'fun' getting there, and I like the instrumental "Ghost of the Gallows" quite a lot.

Whether your craving old school death or death/doom (like Hooded Menace or one of Elektrokutioner's other bands, Father Befouled) without the usual Swedish sound off, Profane Doctrines Unburied should do the trick. It moves with all the spunk of a shambling corpse just reanimated in a peat bog: slow, but just as pestilent and deadly if it can clasp its groaning jaws upon your appendages. The entire album reeks of obscurity and disease, and it's just as tight as either of its predecessors. No fucking around, no fucking off, simply sincere and accursed old grandfatherly gore that can sooth the horror obsessed misanthrope dwelling inside each sick one of you. Fuck the future. Let the past swallow you anew.