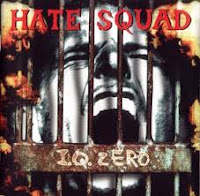 The urban sample that initiates "Not My God" does not exactly bode well for the contents of Hate Squad's sophomore outing I.Q. Zero, nor does the cover image or the title itself. Coming off the miserable debut Theater of Hate, one could really expect no more than cheap groove/thrash dead set on the lowest common denominator. Alas, the band's songwriting had noticeably improve with this album, and thus it was far less of a chore to listen through. Rocket science this is not, but the Germans throw enough hooks at you to justify their existence, and even if it's ultimately not something I'd ever go out of my way to attain or listen through, I can certainly hear how this might have some appeal to fans of the Skinlabs, Machine Heads, Biohazards and so forth.

"Not My God" is essentially a pure fusion of gutter tough guy metal with a few thrashing breaks, but the thick tones and ballpeen hammer chugging sections definitely stir the blood, and when the melodic thrash/death verse of "B.D.D." comes calling, you can be assured the band has come a long way in just a short time. I still feel like they rely too much on their primeval, pedestrian muting, but these segments are always balanced with something more interesting, whether that's a rapid assault or walls of dense chords over which the bricklaying vocals slather their cement sludge. There are several tracks here I couldn't care less for, like "My Truth" and "I.Q. Zero" itself, but later in the track list are some better compositions like the hardcore/thrash of "Different from You" with its glints of melody, or "Terror" which balances big grooves with two fisted momentum that would have any pit jumping da fuck up.

There are plenty of flaws here, from the pathetic metalcore lyrics which any 15 year old could write on the back of his notebook when he's pissed at his bros and hos; to the fact that about half of the tracks take a dive in quality compared to the rest. Yet it's a lot easier to swallow than Theater of Hate, because it's rarely boring, and more often than not, the notes simply work. It would be difficult to imagine any audience for this album in the 21st century, but if you get your 'guilty pleasures' on for primal ghetto metal, with enough grooves to orchestrate your fetish for tire burning and rock hurling through windows, then I.Q. Zero might just provide 40 minutes of testicular release. When you run out of Hatebreed, there is Hate fucking Squad! Graaaarrrr!