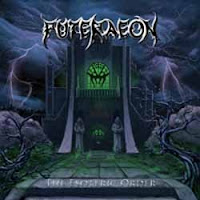 Puteraeon is yet another round-up of semi-successful Swedish death metal musicians into a decisive act of old school worship, and yet they once again prove that the style has legs to stand on, by effectively crafting hostile hammers of crushing tone and thick, pungent atmosphere. Bands like Tormented and Ribspreader are good references, because they have a similar approach with the enormous production standards used to modernize their libations to the gods of the genre: Entombed, Grave, and Dismember. You've heard this all before, but when its delivered with this much loving brutality, you're going to find it difficult not to at least smile...until your knees rupture and your head bends off your spine from the sheer, bass-heavy gravity of The Esoteric Order.

These gentlemen have a lot of experience in bands like Taetre, Immemoreal, Nominon, Inverted and Thorium, so it's not out of left field that they know how to lay down a pure smack down like it's 1991 all over again, with all the tools now available to make those pure Swedish guitar tones thicker and even more wretched. Tunes like "Graverobber", "Whispers of the Dead" and "Dead Once More" make it impossible not to lurch around like an animate corpse, and the bristling leads and overall, thick as molasses atmosphere to the record make it a total package of derivative but delightful darkness. The lyrics revolve heavily around the HP Lovecraft Mythos and cult/campy horror flicks, so it's safe enough territory for the pulp loving misfit who attends zombie walks while not alienating those who seek Indecent & Obscene Pt. II or Clandestine: The Musical on Ice.

I've heard this style performed so many times now that I'm almost fed up with it, but these bands love this shit and obviously there are fans devouring it straight from the bowels of antiquity. But think of it this way: if bands like Entombed or Grave had time machines, they would have jerked their cult classics forward to the future, smothered them in this ominous tonal largesse, then transported them back to make even more jaws slack in the early 90s. Old dogs with a few new tricks, indeed. Fortunately, The Esoteric Order is yet another in those long lines of exceptions, so despite its lack of intricate tweaking, it's the equivalent of an addictive, crunchy snack. You think you're through with the bag, and can put it aside for later, but you've just got to reach in and consume one more. Just one more archaic sounding Swedish death record. One more. Really...I mean it. Well done, Puteraeon.