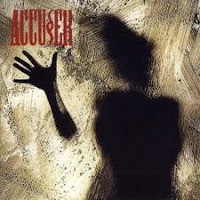 Though there are some trace elements of the semi-tech thrashing that flourished on efforts like Who Dominates Who? or the less able Repent, they are hardly in abundance, and Reflections is the most abysmal of Accu§er full-length efforts. The band had hit some rock bottom here, some indescribable need to feed off the trends of the decade that truly dampened their ability, and the ratio of miserable, derivative thrash/groove garbage here is simply too high for their more positive ideas to scale. It's rather a letdown, even for a band like this that has never struck gold or even silver with their idea mines, because I actually enjoy the simple aesthetics of the cover art, and was patiently hoping for some manner of sleeper hit here.

Alas, the material sadly never surpasses even the low bar set by the tracks from the sibling Confusion/Romance EP, those being "Cowboy on a String" with its "One"-like opening riffs and sledgehammer of dull artillery; and the trawling, mediocre "Misery" which teases with a decent riff or two in the bridge, but otherwise devolves into a sluggish muted groove-fest which thinks of nothing but moshing, flailing limbs. Certainly this is still thrash metal, if just for the method of tightly wound, distorted riffing and clear Bay Area influence (Metallica, Testament), but I can count the passable riffs on one hand, like the charging in "Unite - Divide", and even these are not worth listening to twice if you can avoid it. Frank Thorns gives his vocals an over abundance of rockiness, to the detriment of the bludgeoning below. Reflections sounds 'tough', like a brash kid brother to ...And Justice for All and Cowboys From Hell that forgets that those albums consisted of memorable songs.

I'll give Accu§er some credit that they don't go all out nu-metal or anything. This is very much a natural follow-up to Repent; it doesn't take a huge leap of imagination to see how the band might have desired to grow somewhat groovier for this, but it's so uninteresting as to become a chore just to survive through the nine songs. As much as I disliked Double Talk, there were just better songs and guitars there. Reflections does sound mean, with enough cartwheeling mosh hymns to fuel those that could care less about their own flashy displays of mock violence, but it's void of any other quality except for the CD booklet serving as kindling for a fire.