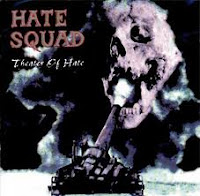 Unlike its more bitter, brutal offshoots of black and death metal, there seemed to be less and less of a place for pure thrash as the 90s rolled on. It was far below the attention span of most newcomers who were exploring metal music, and what new bands were spawned would, as usual, attempt to replicate the success of those few bands to modify the style enough to survive. Such is the case for the Germans Hate Squad, who, aside from an incredibly generic name, had taken it upon themselves to offer up yet another highly urban, groove influenced thrash sound which was almost instantaneously forgettable.

Their debut, Theater of Hate, nevertheless wound up on G.U.N. records, a label better known for its power metal acts in the 90s. This is essentially a Teutonic alternative to Sepultura's Chaos A.D., threaded with the influence of bands like Machine Head, Biohazard and Prong, and only a mild helping of traditional thrash. But whereas the Brazilians' beast of an album was a successful merger of cultural identity, sociopolitical lyrics, variation and monolithic grooves that sweep over the listener like a riot inducing fog, this falls very flat and dull. The riffs are chunky and simplistic, with an excess of chugging and pitiful, bouncing meathead grooves that only rare spawn forth anything ear-grabbing. "Cause and Effect" sounds it was almost directly lifted from Sepultura with a different vocalist, and the attempts at more streamlined thrash like "Condemned to Die" or "Hardness of Life" never leave the launch pad due to the dull, average riffs.

There is definitely a miasma of 'tough guy' surrounding this recording, but not fully committed, so while you might hear break out a Biohazard album these days for laughs and relatively well composed hardcore metal, there is just no personality here. Hate Squad does have a sensitive side, felt through the weird segues in "Love/Hate", but even this is written with riffs that a four year old could write instantly as soon as he learns how to perform mutes. The only song I didn't shun was "Mindloss", a thick, streaming rock piece which manages its moshing, dreary force into something more mournful and atmospheric than the rest of the album. Theater of Hate is fairly well produced, and tightly executed, but it's ultimately far too short on content of value that I'd recommend it to even the most tasteless groove/nu-metal advocate.