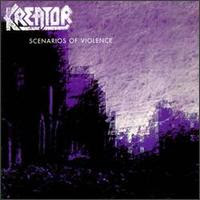 Considering the German band's swift ascent into the elite of European metal through the mid to late 80s, I'm surprised it took as long as it did for a fan package like Scenarios of Violence to arrive. Perhaps the band had been adamant that such a release not be put forth as an empty accumulation of material lifted as is from the prior full-lengths and EPs, because Mille Petrozza himself was involved in some of what when into this Kreator collection. There are 16 tracks and 67 minutes of music here, and almost every track included has at least been remixed or remastered by Petrozza and Siggi Bemm, while there are also live inclusions, and a few previously released pieces that might spark the fan's interest.

Are they worth hearing? No, not really, and there is a good reason they'd be included here and not on some future full-length. "Suicide in Swamps" sounds like a mix of Renewal and Cause for Conflict era-material with groove, mystique and ultimately not a damned thing catchy, and "Limits of Liberty" is another hardcore/punk infused track, fun while it lasts for 1:38 but just as forgettable as most of their other indulgences down this path from Cause for Conflict. The live tracks "Ripping Corpse" an "Tormentor" are quite violent, vibrant and old school, but neither are they enormously valuable. If anything, they pose the question of why Kreator hadn't released a full-length live effort yet, only VHS and a few tracks scattered on EPs and this.

The remainder of the Scenarios of Violence consist of those cuts remixed by Siggi and Mille, most of which are taken from Renewal: "Renewal", "Brainseed", "Europe After the Rain" and "Karmic Wheel", none of which I prefer to the original mixes despite their newfound cleanliness; a few others are culled from Terrible Certainty: "Toxic Trace" and "Terrible Certainty", and it's more prudent to hear these polished since the production of that album was all that held it back from perfection. There are also some tracks digitally refurbished by Bemm: "Extreme Aggression", "Some Pain Will Last", "People of the Lie", and "Coma of Souls", none of which really needed the treatment in my opinion. Otherwise, there is nothing new to be had here, and the alternate US version features other tracks that are likewise previously released.

Scenarios of Violence doesn't have much to offer the fan, I'll be honest, and if you're new to the band then you need to just hunt down all their albums up to Coma of Souls and possibly give Renewal a chance. This is not a band one ever needs to 'ease into' through a greatest hits package. That's really all I need say. The unreleased material here would have better been served as bonus tracks on Cause for Conflict, and the remixes could have waited for full LP remasters. So, in the end, even though more thought was put into this collection than similar cash grabs which feature nothing more than pre-released songs, it's still not worth the money you would spend on it.