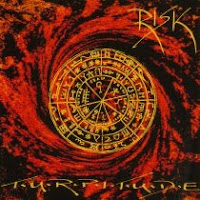 Turpitude is the 5th and final album from Risk, and it's just as well, because this the first upon which the ambition of the band seemed to finally catch up with them in years. The content is not a far cry from its predecessor The Reborn, but the band had sacrificed some of the epic compositions there for a more bland repository of atmosphere, dull power/thrash. There are very few tracks here which provoke the urge for even a second listen, and without exception these are the ones that sound closest to out-takes of The Reborn. When comparing that album to the band's entertaining early work like The Ratman EP or The Daily Horror News, one can hear the strained but not unnatural progression. But line this up against the debut and you have to wonder 'where did all the spirit and fun disappear to?'

Straight down the drain. The acoustic intro to "Cry" cedes to a basic series of slow, smudged riffs that serve only as a catalyst to the more interesting, swarthy vocal melody, while a mystical guitar line hides off in the backdrop. It's not awful, but really needed to be followed with some energy, which "Materialized" is not, just another pedestrian stream of dull chugged mutes that accompany similar vocals to the first track. There are many other indistinct tracks here, like the groovy but forgettable "So Weird" with its awkward chorus, "And We Don't Care" or "Show No Mercy", which sounds like a half-retread of "Materialized". At best, you get some modern power/thrash with similarities to late 90s Rage: "Squeeze My Skull and Brains" and the sad "Hopeless Ground", but even these sound like the band had thrown in the towel, and not fit to even shine the boots of The Reborn.

It's a terrible thing, when a band like Risk dishevels at the seams, after so many years, starting as Faithful Breath in the damned 70s. What's even sadder is that all of the members here seem to have given up on metal entirely after this recording, retiring to their families and other interests. Turpitude was not the proper note to leave on, almost as if the 'wrongdoing' implication of the title should be taken literally. But the saga of the monkey, crocodile, hippo and piranha will always live on through their inspirational debut album and the reasonable qualities of the follow-ups that led up to this one.