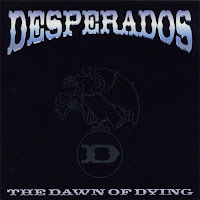 Thrash metal and the Wild West. Two birds of a feather. In fact, I'm honestly surprised they hadn't collided earlier than this. At least not to the extent found in the output of Desperados (later exchanging the final 's' for a 'z') the project of one Alex Kraft. Some might know the guitarist from Tom Angelripper's solo band when he wasn't busy with Sodom. Why, Tom himself has sharpened his spurs for this debut, saddled his horse and strapped his pistols for this debut, The Dawn of Dying, and you'll find his very distinct vocals all over this high-falootin', six-shootin' concept album., which somehow, despite its absurdity, manages to not insult either the audience or its source material...

Thrash metal and the Wild West. They could have been joined better, but for what it's worth, I will take this. The album plays out like a classic Western, opening with crickets in an open prairie, then an ascending instrumental with guitars, pianos and distant percussion, before the swagger of the cowboys begins with "Gomorrah of the Plains". This is your basic mix of thrash and traditional heavy metal, lots of simple mutes but glazed over in atmosphere and melody appropriate to the fictional, historical realm the band's thoughts are dwelling in. Nothing really to write home about, but there are better songs which better utilize the bells and whistles and general atmosphere, like "Dodge City", "The Dawn of Dying", "Devil's Horse" and "Gone With the Wind", the last of which is like a Southern cousin to "The Saw is the Law". Several of the tracks go further into the traditional country/blues of the setting, with pumping, fun bass lines in "Jumpin' Down the Running Train" or the rock anthem "My Gun and Me", but it all fits in surprisingly well together.

I would point out that the actual thrash core of this band itself is not very interesting. I couldn't count a single riff here that would raise my hackles in a positive frenzy were it not for the dressings of the thematic, theatrical instrumentation. Without these dynamics, The Dawn of Dying would be a tremendous bore, even with Tom Angelripper on for the ride. But when it all comes together, it's hard not to smile at the band's intentions. Obviously, by nature this sort of project seems silly, but the Germans don't fuck around with it. The lyrics are pretty damned crazy, in fact. Which begs the question: why is it that it took a group of Europeans to come up with this? We should have had dozens of cowboy thrash bands already...and no, Agony Column and Pantera don't count. First they beat us with some of the greatest films of all time (directed by an Italian), and then the damn Germans beat us to quality Wild West thrash. It kind of stings inside, but The Dawn of Dying helps me bear the annoyance like a full swig of whiskey.