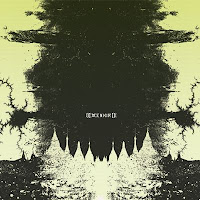 Canopy proved through their 2009 effort Will and Perception that they were one of the most adventurous and promising melodic death metal acts that you hadn't heard of. But while that was a recycling of earlier material with a few new hooks traced onto its carapace, their third full-length Menhir is an entirely new, exotic beast of darker proportions. Unlike most of the acts to pollute this neglected genre, Canopy are quite heavy, relying on guttural instincts and vox above the tacky metalcore sham that has poisoned so many of the style's mainstream advocates. This is an album of horrors and delights, met at the middle of its purposeful, almost progressive constructions and a frontman who sounds like a cobwebbed tomb opening.

You will not hear too many of the standard Dark Tranquillity and At the Gates picking sequences present in these seven tracks, but explorations of rhythm and dynamics that reek of unexploited ingenuity. If anything, they bear more resemblance to Finns like Insomnium in how they fashion their more accessible material (the chugging/melodic exchange of "A Storm Within a Storm"), but elsewhere they completely dazzle, even the longer compositions ("Menhir" itself) never overstaying their welcome due to the variation of the guitars, thick sludge of the bass, and the balanced drumming. I personally found "The Entire City" to be the catchiest piece, with its swaying segues of glinting, clean guitars and bass, and the bristling spikes of its rabid escalation into majesty, but there are compelling elements in every single cut, like the wiry melodies of "Inward Burst" or the glorious and curious stretch of the closer "Zenith".

Like its predecessor, Menhir proves that this genre can still be executed with some integrity. I can't say I enjoyed it all that much more than Will and Perception, it seems level in quality, with this being the more adventurous effort and that being slightly more catchy. The aesthetics of the recording are solid when you consider that there's no major label backing, and the band never insults your intelligence in their writing. There may yet be an act of heightened euphoria from this band that splays them across the radars of the modern melodeath inebriate, but this will certainly do if you find yourself in rapture of the sounds of Insomnium, Bel'akor, Elenium, Opeth, Omnium Gatherum or Back to Times of Splendor by the Germans Disillusion.