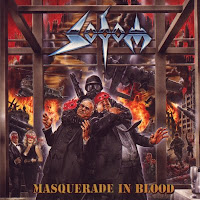 Thrash metal on the whole might have been dying a painful death by the mid-90s, but particular acts remained very busy during this time, including the 'Big Three' of the German scene...or rather, two out of the three. Sodom, at least, were quite prolific, releasing a bunch of albums, each one a very mild shift in style. Masquerade in Blood, which comes straight on the heels of the fluid, barbaric punk thrash of Get What You Deserve, is essentially Tom Angelripper manifesting a dream: for Sodom to at last become Motörhead. They had certainly hinted at such intentions through the past, but seriously, if not for the very subtle difference in vocals due to the different accents, and a few of the more brutal tunes (like the first), this could be a fucking Motörhead record if the NWOBHM band was in a hostage crisis.

Let's not forget, Lemmy and his boys have come close to thrash metal on a number of occasions in the 90s and 21st century, so it's not a huge stretch. Sodom are certainly still more warlike and political by way of their lyrics, but the huge bass tone and riffs here are very reminiscent of the British legends' slack-jawed, pure rock and roll aesthetic approach, even when thrashing out. I would point out that I at least prefer the guitar tone here to Get What You Deserve, because you can actually hear it and there is more than just bluesy noodling and raw fucking about to accompany Tom in his diving lines. No surprise, this is because Sodom have acquired yet another guitar player! Dirk Strahlmeier steps in for Andreas Brings, and brings a big, chugging tone with him to tracks like "Hydrophobia" and the brutal opener "Masquerade in Blood" itself. Unfortunately, so few of the guitars performed here even hinge on memorable that the effort and power being splayed out here seems rather wasted.

Masquerade in Blood does not lack for dynamics, and there is some distinction in the track list between rockers ("Fields of Honour", "Verrecke!" and the cover of Anti-Nowhere League's "Let's Break the Law") and thrashing, violent velocity ("Murder in My Eyes", "Scum", "Shadow of Damnation"), but the riffs are unanimously boring, with notation patterns that can't have taken more than a few moments total to whip into songs. Tom sounds his disgusting self here, not a lot different than the past two albums except where he's flaunting his Kilminster impression, and the bass is thick as blood pudding, but I don't think there is a single track I could point out as a 'highlight'. Mildly amusing, perhaps, but this is quite likely the least impressive Sodom full-length in 30 years, and not worth acquiring unless you're the textbook completist.