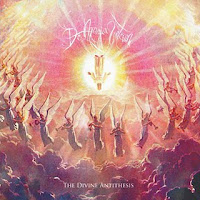 The previous De Magia Veterum full-length, Migdal Bavel was the equivalent of sonic rapture. A bludgeon of malignant black noise that left me both mesmerized and mutilated. The culmination of 'M's 20+ years crafting blasphemous aural architecture through projects like this one, Gnaw Their Tongues, and various of his former, demo level projects in prior decades. Naturally, I had some rather high hopes coming into The Divine Antithesis, and after a few listens, I cannot say that I'm heavily disappointed. It's not necessarily the measure of the 2009 opus, but it approaches its utter sense of disheveled chaos with a different aesthetic that sometimes feels more annoying than absorbing, more callous than cloying.

As usual, 'M' throws the book at you. Walls of discordant guitar riffs grinding down your spine while both black and spooky, Gothic narrative vocals sound off in unholy unison and the manic programming escalates like a composite phalanx of spastic grindcore drummers. It's essentially the poor man's Deathspell Omega, with a similar effect due to the theistic lyrics and jangling, panicked guitar lines, but this is far cruder; not the sort of music you expect to 'enjoy', even when you are affixed and fascinated to its jubilant torture. I found "The Stench of Burning Wings", with its streams of gallant, colliding noise, and the ravenous, ripping walls of "Burning Hands and Crowns of Flame", the soothing near miss bliss of "Angelical Deformity" with its ringing, down drifting melodies and insectoid droning alongside the deep chants in the bridge break.

The Divine Antithesis is like being molested by a gang of fallen angels in every orifice. It's noisy, abrasive and will truly piss off anyone who is not expecting it. That said, as usual, De Magia Veterum is an acquired taste. You will either fall in line with the sheer chaos or you will fucking loathe it and spit upon the ground 'M' walks on as he's coming up with these nightmare scenarios. Personally, I enjoyed it, even for its differences from the last album, which I preferred. This is the sound of all the world crashing, all beliefs shattering and all hope being cut free from the corporeal human shell to herald the spirit's ultimate collapse unto oblivion. Harrowing.