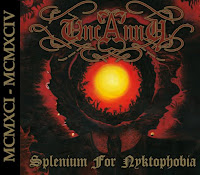 Uncanny was a pretty tremendous Swedish death metal act in their day, but their star was apparently not meant to rise, and thus they sunk into obscurity after breaking up in the 90s, their members scattered to winds as wide as Centinex, Katatonia and October Tide (Fredrik Norrman is an alumni). For many years, their sole full-length Splenium for Nykotophobia has been out of print and nigh impossible to find through normal channels, but this situation has now been rectified by The Crypt and Dark Descent Records, who have issued it both as a triple LP and double CD set that include all of the band's material. Since the time is right for this genre, with scores or more of new bands recycling this old Swedish sound, it's a perfect opportunity for newer fans to finally get their hands on all the band's material.

Disc 1 is Splenium for Nyktophobia in full, and it still sounds quite good. Pure, muscular death metal with the beefy tones of an Entombed or Dismember, circa Clandestine or Indecent & Obscene. Tracks like "Brain Access" manage both curving, crushing grooves and cutting leads very well amidst the primal thrust of the verses, and grating guttural vocals. Other favorites include "Screaming in Phobia", "Indication Vitalis" and "Towards the Endless Throne", not to mention the great synthesizer outro/title track. Considering the production standards then, it is rather a surprise that Uncanny did not see more success than they did, and yet there was likely only room for so many Swedish death acts at the top, so this one was sunk below the level of a Grave or Unleashed in impact. But, like Gorement and others, the material is well worth a visit and purchase for any fan of the era and tone.

Disc 2 is another treat, reprinting the band's Transportation to the Uncanny (1991) and Nyktalgia (1992) demos. A few of the tracks are redundant to the full-length, but much of the stuff has likely never been heard outside of this release, so it's impressive that the demos were of such an accessible quality. Granted, they're not at the same standards as the album, but I doubt anyone would be expecting such, so here is the chance to assimilate and appreciate neanderthal thugs like "Profligacy of Power", "Why My Intestines?" and perhaps my favorite titled "The Porno Flute". All in their raw, brutal color draining glory.

Those who read a lot of my critiques will realize I'm often very hard on worthless compilations of a band's previously released material, but MCMXCI-MCMXCIV is exactly the sort of package that the doctor (and fans) ordered. Complete and infallible, it even includes tracks from the band's 1993 split with Ancient Rites, including one ("Determination to Win") unavailable on the other recordings. What you're getting here is not just a CD or LP set, but an entire career that you can lavish as much as you please. Uncanny might not have been the most unique entity, and their album Splenium for Nyktophobia is not the measure of a Left Hand Path, but it was well worth hearing in its original incarnation, and if you're savvy to that early Swedish sound, well worth owning in this format.