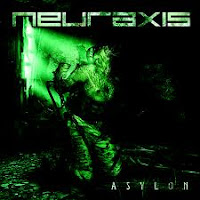 Neuraxis have honed themselves towards perfection in numerous categories through their 17 year existence, not the least of which is in the production of their albums. Asylon, the band's 6th full length album is even more terse, cohesive and forceful than its predecessor The Thin Line Between, which was packed with interesting grooves that acted upon the listener's conscience like the sterile hypnosis of machinery in some test laboratory, with you as the subject. Asylon paints in broader strokes than that 2008 effort, returning to some of the more brutal impetus that characterizes Canadian death metal, but they have maintained enough of the mechanical regimen that it plays out with a well-oiled, fluid consistency.

Of course, the pristine polish of the album is likely to turn off those who have a loathe on for all death metal modern, technical and interesting, but then, they would be unlikely to check out a Neuraxis album in the first place. Those who covet the sounds of Beneath the Massacre, Origin, Despised Icon, Cryptopsy, and the entire host of modern Californian death metal bands will probably find a lot to appreciate here, especially where the album carves out the most variation, like the narrative shifts of "Trauma"; the unforgiving hostility of a "Savior and Destroyer"; and the uncanny, warm twists of melody imparted in "Asylum". The leads are all cautiously wrought, and the band do an impressive job of avoiding monotony despite the fact that they could blast and wank all year long and never even feel a tiring in their joints.

All said and done, I did not find Asylon to be quite as mesmeric as its direct predecessor. The blunt delivery of Alex LeBlanc by this point has worn a little thin with me. His vocal chops are more than suitable to any band in this style, but they're rarely inventive in phrasing, a mere cypher of bludgeoning force with no murderous intent behind the eyes. There are some good pieces here, like "Asylum", "By the Flesh", and the manic thrashing of "V" which I've been repeatedly visiting, but as a whole I found myself too able to skip some of the ballast. The band is wise to offer some breaks in the action later on the track list ("Resilience" and the calm that marks a portion of "Purity"), but these points are not quite curious of their own accord. This is sleek, modern, and well rehearsed fare which makes a good enough account of itself, and surely would offer a few thrills to the tech death purist in favor of high production standards, but its not imbued with the breath of ages.