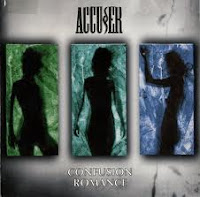 Accu§er were never considered one of the finer exports in German thrash, and had certainly taken a number of missteps prior to their 1994 output (i.e. Double Talk), but at least the band could claim that they were not total shite. Come the Confusion/Romance EP and the Reflections full-length, and I'm afraid they would have to withdraw such a claim, because these efforts represent the true bottoming out of an already mediocre body of work. This is where Accu§er flung away what modicum of decency their meaty, previous thrash effort Repent provided and truly subdued to the music industry. This particular EP is only a teaser, an accompaniment to the fouler, longer Reflections, so perhaps it could be considered the lesser crime, but it's still really bad.

First up we have a cover of Nine Inch Nails' "Head Like a Hole". Now, being that this track was a huge success in the early 90s, and many metalheads had become fans of Trent Reznor's industrial rock legend, it's not such a surprising choice. Accu§er had already recorded a moderately disposable rendition of Die Krupps' "Metal Machine Music" on the last album, Repent. But the NIN cover is comparatively crap. The synth line of the original is simply altered to the guitar line, and Frank Thorns' bludgeoning vocals do a disservice to the otherwise catchy patterns of Reznor. There's another cover on this release, "Driver's Seat" (Stiff'n'the Tears), an English rock tune form the late 70s, similar to but predating Neil Young's "Keep on Rockin' in the Free World", and just as boring.

The new originals, "Confusion/Romance" and "Cowboy on a String" are equally horrendous; the former a pedestrian thrash groove with zero hooky riffs and beefy vocals which teases us with a half-decent thrash riff in the bridge that goes nowhere fast. The latter is even worse, with an opening volley that rips off the chugging bridge in Metallica's "One", and then proceeds to mangle another pure thrash rhythm with bad, harsh Biohazard-like barked rap vocals in the verse. The rest of the EP consists of two live cuts: "Misery" from Reflections, and "Repent" from the album of the same name. "Misery" has perhaps one decent riff in there, but it's saying a lot that "Repent" is better than anything else found here, or that the live cuts in general are the only element to this recording that is not knee deep in stink.

Confusion/Romance was obviously meant for the fans, a cute little package with some covers and other nonsense, but I can't see how even a fan of the band's lesser works would justify it with their attention and time. Things are/were not looking up for their 5th full-length album, and even if Accu§er was never a great or even original band to begin with, it's sad to see them sink to the level of regrettable convention that fouled so much of 90s metal.