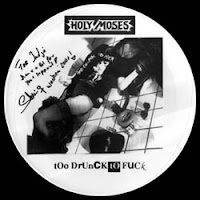 We had managed to be spared for six full-length albums before the inevitable 'fan package' compilation arrived, but when it did, it took the form of an expanded release of the band's 1991 Too Drunk to Fuck cover single. This is little more than the re-release of the band's cover songs, with a 5-track compilation, a few cover songs and some rehearsal tracks, and in short, it's just a convenient way to shovel some extra money upon Holy Moses, or their label at the time. Like many such collections, there has since been a re-issue of this with even more content, namely some early live recordings from 1982-84 that had been released as a rare demo. I'd advise not wasting your time at all with the Too Drunk to Fuck package, but if you're going to, then you'd might as well grab that 2006 for the minimal, added value.

The compilation begins with the covers of "Too Drunk to Fuck" (Dead Kennedys) and "Fight For Your Right To Party" (Beastie Boys), both of which the fan will already own with the CD of World Chaos (1990). I rather like their Dead Kennedys cover, but it hasn't suddenly sprouted wings here and flown away to another level of appreciation. After this, there's a very short compilation of previously released material: "Theotoloy" and "Distress of Death" (Terminal Terror, 1991); "Clash My Soul", "Welcome to the Real World" and the cover of D.R.I.'s "Five Year Plan" (Reborn Dogs, 1992), which had just been released a year prior! What a fucking waste this is. Then we actually arrive at the few tracks that the Holy Moses fan might actually have shelled out their money for. Rehearsal renditions of "Finished with the Dogs", "World Chaos" and a song I hadn't heard called "Waste or Try". Neither of the studio tracks sounds any better in this situation, and the unreleased piece is average.

Finally, there's a cover of "Black Metal" with Cronos and members of the Holy Moses-related thrash band Warpath involved. It's not the best remake of the song I've heard, and I don't like the gang vocals, but it is perhaps the one thing on this stinking heap that is actually worth hearing. But honestly, maybe you could find it at YouTube or somewhere else. Too Drunk to Fuck is just another asinine grab at the fan's wallet, no matter who was involved. Consider that Holy Moses had about a half dozen demos in the early 80s. Would we not have preferred a compilation of these? That might at least been worth shelling a few dollars for. This, this is just pitiful, and the Venom cover does not make up for any financial loss.