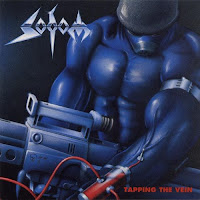 Tapping the Vein is not often mentioned in the same breath as the favored Sodom classics like Persecution Mania and Agent Orange, but if I can say one in its favor, it's pretty characteristic of the 'pure' Sodom sound. Take everything you loved about those albums, crank up the density and intensity, and simply slaughter the fan where he stands. That was the purpose of this effort, and to that extent, it's an enormous success. Where it falls apart, though, is in the smaller details. It offers almost no surprises, no huge choruses that blow the mind like a "Nuclear Winter" or "Sodomy and Lust". It's little more than business as usual, but if you're a steadfast Sodomite, that might be exactly what you want to hear.

As far as just the tones of the mix, this is perhaps one of my favorite releases from the German vets. The bass here is huge, like a meatgrinder being recorded straight to tape and then fluctuated to create notes that will act in accordance with the guitars. After but one album, Michael Hoffman had left Sodom, so the band have yet another new guitarist here in Andy Bings, but he definitely goes a long way towards renewing that Blackfire tone some might have been missing from Better Off Dead (which was a great album anyway). Tom Angelripper sounds fantastic here, with one of his most bloodthirsty, violent performance, very often bordering on the death metal grunts he was partially responsible for creating in the first place. The whole effort sounds like steel artillery being shot off in an enclosed stadium, painting the bleachers with viscera.

There are also a few undeniably great songs here, including the two barnstormers that blast open the proceedings, "Body Parts" and "Skinned Alive", riff choked and overflowing with the maniacal, distorted bass lines. Love the fucking vocal echoes in "Body Parts" during that sick breakdown. You simply cannot sit still for that. After this, the quality becomes a little mixed. "Deadline", "Hunting Season", and "The Crippler" are murderous and truly exciting, while a few of the others like "Bullet in the Head" and the rocking "One Step Over the Line" aren't so blessed in the writing department, though Tom's vocal presence does a bit to compensate. The leads here can rip aluminum with ease, and tucked into a few of the tracks are some excellent, raid fire rhythm guitars. I can completely do without "Wachturm/Erwachet", which is yet another of those Sodom stapes: the German punk/thrash/rock track, but "Reincarnation" is another standout, nearly 8 minutes long with some cautiously elevated warfare.

In the end, I love about half of Tapping the Vein and shall until I die, but I would probably find the rest skippable if the tones weren't so damn good. This is probably the most straightforward the band has ever and will ever record, the very essence of their warlike personality, conjured in the lyrics, the riffing and the blood-drugged, 'Rogue Trooper' mascot on the cover. It's sheer, unapologetic and shows a band that was in no danger of flying the surrender flag when thrash was beginning to get raked across the coals. If I could somehow experience the better 1987-89 material with this same production standard, I'd probably be so happy I would cease to exist, but the lack of total consistency in the songwriting drags it down below their more recognizable classics.