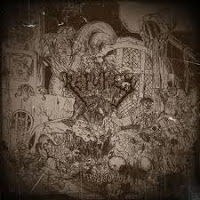 Pervertopia would not the first time we've heard a fusion of death metal, d-beat grind and punk ethics; bands like Disfear, Death Breath and Trap Them all hang in the balance, but for the young Repuked, the aim is to affix the splatter of primal, nasty primate punk to the visceral momentum of early 90s Swedish death, a task to which they succeed admirably, like some crass embodiment of Repulsion, Entombed and Autopsy in a cockfight. This is the band's first album after a pair of demos, and it incorporates a lot of thick, streaming guitars with jangling noise, breakdowns and a slew of guttural vocals that assault you like a street gang of drunken undead sailors and whores with their jaws and tongues shorn off.

Of course, this is ridden with the juvenile aesthetics one might expect from such a 'fun' band, like the hurling intros to "Mental Vomit" or "I Wanna Puke On You", but these are very easily forgiven when the material is so solidly executed, like a bowel cleansing factory with guitars. The riffs are often incredibly simple ("I Wanna Puke On You", "Fucking Something Dead"), but they are still effective enough to get a circle pit active. However, there are some deviations from this pattern in "Orgasmic Death Deliverer", which opens with some busier, morbid guitar patterns over the booming chords, or closer "Toxic Constipation", an epic 8+ minute doom/death/sludge piece which is engrossing due to the incessant guitar noise being cast above its rhythms. I'm also privy to the primal rocking of "Morgue of Whores", a creepy intro shifting into giant chords that eventually pick up speed.

Ultimately, the area in which Pervertopia lacks is simply in memorable songwriting. If you were carting a busload of gore-obsessed grind freaks to a cannibal barbecue, or a vomit fetish rally, then this would make for great listening en route, inciting the gastric and reproductive juices of an audience churning for satiation. The bludgeoning, grotesque atmosphere created here is somewhat unique, for instance, you won't hear this on most General Surgery recordings. But outside of the tone and the variation in tempos, and the frothing guffaw of the entertaining vox, there are precious few moments of invention and titillating guitar work. It's not a dry heave, because these tracts are choked with wet, clammy bile, but the stomach muscles are too soon to relax, the toilet odors too fleeting to cling to your senses for very long. But for 45 minutes of disgusting aural architecture, you could do far worse...