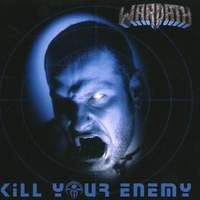 I'm shamed to say that the crickets that close out Kill Your Enemy, the 4th and final album from Germans Warpath, offer all too apt a closure to the band's middling career. The very definition of dull, this album sums up just about everything I couldn't stand about 90s groove metal, all in one convenient location, and makes even their prior, mediocre albums seem pleasing by comparison. Where the last effort Against Everyone actually showed some vital energy, some promise amidst its effortless, grinding guitar craft, this album slows the pace down once more to a crawl, a battery of boring open chords configured into Biohazard grooves and Pantera breakdowns which lacks all the character that such acts rode to infamy.

You seriously have to travel pretty deep into the content here to find a song that doesn't make you instantly gag, it is that uninspired. And I'm not saying that because there's a single track worth noting, only that the hardcore fueled "Sign of Hard Times" is too welcome a break from the sodden grooves of crap like "Die Maschine", "Stomp" or "Overrollin'" (what?). Oh wait, that's because it's a Cro-Mags cover and not an actual Warpath song. They attempt to fake some vulgar speed with the first few cuts, but they all devolve into tired, pedestrian chord patterns that sound as if the guitar players are unaware of anything beyond the lowest 4-5 chords on their guitars. This material is built ground up for the moshing crowd, and the mosh crowd only, except that it doesn't even have much to offer those brigands...

The new vocalist Arnie is monotonous and angry, using the sort of bludgeoning tone that was perfected by Sheer Terror many years before, and used to no good ends since. Otherwise this was the same band, bassist Maurer sharing duties with Temple of the Absurd, a band which several alumni of Warpath fled to, working with Holy Moses' Sabina Classen (and not good either). Somehow, this band managed to hang on to their Steamhammer deal for years, but no level of exposure would brighten this sad excuse for a swan song. Weak lyrics, weaker music. I give to you: the worst of Warpath.