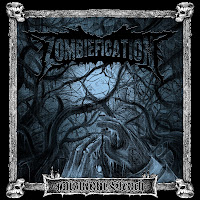 Despite the lack of constituents breaking out in popularity beyond the country's borders, Mexican metal has always been a very busy scene, with dozens of bands exploring nearly every sub-genre you could dream of. Black, Gothic, death, thrash, traditional heavy metal, it's all been done south of the US border, but Zombiefication might be a first for me: a Mexican band with a tone straight out of the early 90s Swedish death metal scene. Big, chugging guitars laden in that all too familiar tone, and resonant but dim vocals reminiscent of L-G Petrov at his most caustic. Midnight Stench is the band's debut, and it features a lot of dense thrash-like rhythms and a pervasive, dark mood that places it alongside other 'old is new' acts like Brutally Deceased, Maim and Tormented.

I'm not going to claim I enjoyed this album as much as any of those I just listed, but if I can give some credit here it will be for the varied tempos. Many of the retro Swedish ghouls utilize a lot of repeated, paraphrased riffing patterns from Left Hand Path, but Mr. Jacko and Mr. Hitch, the two central zombies here, engage in a lot of slower, churning material that is adequate for pit fighting, like the bridge/latter half of "Anthem to the Deathmarch" or the atmospheric, doomed and haunted walls of "Sleepless Mutter" which is easily one of the most engrossing pieces here. I also enjoy a few of the riffs in "Last Resting Place", "Hitchcock Screaming in Phobia" and perhaps even the mindless wailing and storming of "The Early Years", which is as close as the album gets to sheer Entombed worship.

But then, there are also a few duds here which break up the pace and immersion in the album: "Cryptic Broadcast", "Jacko's Funeral Pyre", "Broken Gravestone" and "Necroambulatory" don't have much going for them outside of their authentic, soiled guitar tones. The vocals retain their bloodied bludgeon pitch throughout the whole playlist, but they're all too rarely configured into a memorable pattern (save "Sleepless Mutter"), and the rhythm section just sits its duff on the backburner, ample and aggressive enough to carry the guitars, but never distinguishing itself independently for a more full-bodied assault. Midnight Stench is not a bad record, if you enjoy the proto-death of Sweden in all its forms, and it's interesting to see the influence such a style has held outside of Europe or the States, but I think these Mexicans need a few better riffs to catapult them further into the rank and file of nostalgia addicts that devour this brand of death.