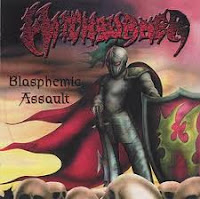 The devil was obviously satisfied with this German band's 1996 debut, pleased by the screams of the heathens sacrificed in the conflagration, and thus he bade Witchburner to continue their path of late 80s revelry. Blasphemic Assault is thus quite similar to the self-titled effort, only somewhat stronger in its production values. Not out to invent or innovate, simply out for a good time, the band continued to harness their immense infatuation with early Sodom, Kreator and Slayer to new heights. This sophomore doesn't necessarily slump, and it's better than its predecessor, but a few fiery volleys of frenzied passion later and the album begins to dip in value as it peters out into some admittedly poor riffs and lazy writing.

Tracks like "Kill", "Thrash Attack" and "Grave Desecrator", while offering nothing of intellectual discourse, at least satisfy the craving for tight, blackened thrash metal perfectly suited for wrist cutting with a sharpened pentagram pendant. There's not much more than a mash-up of Hell Awaits, Pleasure to Kill, Obsessed by Cruelty and Sentence of Death, sans the timeless guitars and vocals of those legendary establishments, but it's going somewhere fast and it might be worth it to get loaded and take that trip, neck brace included. Tracks like "Blasphemic Assault" itself and "Storm of Hate" hang on to the energy, but they feel rather muted by their obvious influences, and lack anything to really say (even the titles seem like they're just re-arranged from their influences). But once we come to what should be the album's climax in "Bestial Command", there's an enormously weak, generic bridge riff turn-off, and the rockin' "Raw Energy" does not fare much better.

That said, Blasphemic Assault might seem suitable for the 'good old boys' of the occult, raw 80s thrash sect. The mix here is clean but not highly polished, and I could go one way or the other with that, but there's a genuine love for the sound of the records the band idolizes, even stronger in the composition of the guitars. Compared to the debut, I found mildly more entertainment here, but nothing bordering on the enjoyment one would derive from superior death or black thrashers like Aura Noir, Bewitched and so on. In the end, Witchburner had merely laid another bloodied brick on the road to remembrance of a legendary caste of bands that remain so today.