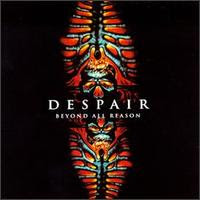 Though it arrived and departed with as little fanfare as either of their prior efforts, it was Despair's third album, Beyond All Reason, that I feel finally manifested the band to their full potential. A curious waltz of elegance and aggression, it has this beautiful balance to the mix that drives home the nigh on endless barrage of melody being evoked through the guitars of Marek Grzeszek and Waldemar Sorychta. Below them, the rhythm section of Klaus Pachura and Markus Freiwald excelled at creating a gut punching experience that perfectly complemented the more aggressive, Bay Area styled riffs that dominate most of the songs (think Forbidden or Testament).

Andreas Henschel also surpasses his prior performance on Decay of Humanity. His work here isn't perfect, but he at least tries to come up with catchy chorus parts and verse lines, and that's more than I can say for so many of the other thrash bands of the 90s. Just check out the lines in "Deaf and Blind", the album's first pummeling beyond the wondrous instrumental intro "Beyond Comprehension", and you'll hear his thin but soaring stab. This sets the standard in quality for almost every song on the album, and titles like "Rage in the Eyes", "Son of the Wild" and the incredibly evocative "Burnt Out Souls" with its frenetic, flighty guitar passages, are certainly the best this band had ever written. I'd also point out the more adventurous "In the Deep", which opens with beautiful acoustic guitars and synthesizers and arrives at a measured, prog/power thrashing frenzy with almost as many cute riffs as you could count.

Some might find the production of Beyond All Reason to fall on the side of 'too clinical', but there is plenty of reverb thrown in over some of the guitars that it creates this feeling of an abandoned asylum or laboratory in which classical scales and intellectual anger collide to produce a spark of beautiful abomination. This is probably the least 'German' sounding of the band's catalog, and I will once again bring up a comparison to Forbidden (Twisted Into Form) or perhaps Helstar (Nosferatu) in terms of the tone and level of riffing density and fine plotting. It's unfortunate that this is also the final Despair album. The band didn't think they could do much more to survive through the 90s, so they went their separate ways, with Sorychta forming the rather crappy groove/thrash act Grip Inc. who would ironically experience more success. But for those seeking out rare and impressive acts within the field of tech-thrash, I'd easily recommend this. In fact, explore their catalog in reverse order. You shouldn't be disappointed.