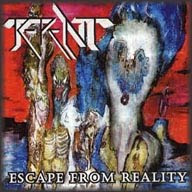 Something was happening at the turn of the century in Germany, some slacking off of the frustration of a decade of sodden heresy, meticulous bullshit being spattered all about the hallowed name of thrash metal. The big bands like Sodom, Kreator and Destruction were returning to form, and it was suddenly no longer taboo for a new band to come along and just thrash the fuck out, regardless of the outcome. Repent did not exactly jump the wagon, they had formed early in the 90s, but it wasn't until the old Y2K that they could commit a full-length studio effort to the world. Escape from Reality is not much to look at, granted, actually it's downright fucking hideous, but if I can say one thing for it: it's a damned thrash album, 100%.

Some influence can certainly be traced to the guitar work of Destruction's Mike Sifringer, but Repent actually sound surprisingly American due to the vocals of Serkan Sanli. He's got a very broad, blunt edge to his tone that reminds one of crossover/thrash bands like D.R.I., Acrophet and especially the Venice Beach outfit Excel. That's not to say they're bad, but certainly not what I'd expect of the German scene, though they do sound seamless with the band's thick riffing. And since the guitars are so prominent here, with a loud, crunching tone, it is in their construction where Escape from Reality lives or dies. Numerous tracks here, including "Endless War", "Locked in Myself" and "Escape from Reality" itself are enormously promising, especially the faster segments and leads, and I like the whacked melodies that initiate "Killer", but in the end, Repent simply do not write content that can be distinguished from the previous decades of US or German thrash. The riffing throughput, while consistent throughout the entire album, is just not memorable enough to sink hooks into you.

Of course, if you're just looking for something to bang your head or mosh to, I can imagine that the material here went over quite well in front of crowds. It's never overtly technical, and there are is a large arsenal of pure moshing rhythms: they've even got a track called "Moshpit" which celebrates their inebriated need to feed on the limbs and suffering of other human beings. I could feel the wretched strings of pre-adolescence tugging at me, and the images of dark, smoke-filled rooms in which I and strangers would collide, but since this is far from my primary impetus in listening to metal music, I never developed much of a connection to any of this. It's a reliable headbanger of an album with big tones and neanderthal skateboarder vocals and not much else to get excited over. Their later effort, Disciple of Decline, is superior.