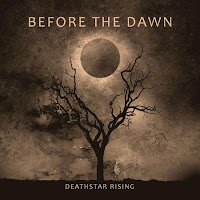 Before the Dawn has always been a fairly diverse entity, strafing the genres of melodic death, doom and Gothic metal, but it's also this diversity which can lean towards some irritation with their writing. For all intensive purposes, Deathstar Rising, their sixth full-length, is such an exercise in frustration. There are moments on this album that are simply breathtaking, but then there are others in which it becomes such a generic and futile course in mediocrity that I found it difficult to believe I was listening to the same band. These generally occur in some of the cleaner chorus sequences or the vapid, chugged breakdowns that one would expect out of a second rate metalcore act. Thankfully, the beautiful moments do outnumber the atrocities, but not enough to save it from the cutout bin.

When this album works, it works with the evocative flair of fellow Finnish melodic death metal acts like Insomnium, Noumena and Kalmah. For example, the acoustic passage "The First Snow" leads into an eruption of solemn, swaying majesty in "Winter Within", a track in which even the clean, soaring Lars Eric Si stand to the memory. "Unbroken", "Remembrance" and "Wraith" are all swathed in resonant emotions that recount Insomnium's latest album, while "Judgment" has a very catchy melodic context in the swaggering chords that drive its rock-like visage. But these are balanced off by the less interesting fare like "Butterfly Effect" which is nothing but a half-decent chorus wrapped up in mediocre melodeath riffing, or "Deathstar" which is bisected by a fairly cheesy breakdown segment. Even some of the better tracks suffer from such misfires. As for the ballad "Sanctuary", it's probably the closest to their more purely Gothic metal material, but not so effective.

The production is of course top notch, this is being put out through Nuclear Blast, and thus you can hear everything clearly, almost too clearly. The album I keep coming back to when I listen to this is Across the Dark, except not remotely as good as that, but if you find yourself obsessed with that sound, or really any of the post-Sentenced, mid 90s or later Amorphis sound then you might develop a fonder reaction to Deathstar Rising than I did. Clean and brutal vocals mixed with glimmering, friendly melodies that are once in a while memorable. It's not a bad album in the end, but maybe some further consideration in the writing and track list could have rendered it a marvel instead of a few great ideas mired by filler. I definitely favor a few of their older records to this.