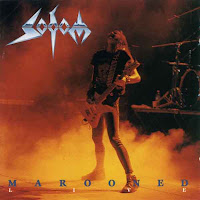 Marooned Live is the second live album in Sodom's career, and a fraction more substantial than its predecessor Mortal Way of Live, even if my enjoyment was not necessarily on par with that. For obvious reasons, of course: Sodom had become a more diverse entity in the ensuing years, with a number of lineup changes, and thus a lot more of their heavily war punk inflections were present in the set list. That list is considerable, with 23 tracks present (21 live), but a lot of them are quite short, 1-2 minutes and change, so the purpose here was much like a live hardcore set, to flatten you repeatedly with tight and energetic material and then see you off to the nearest biergarten, or whatever was available in Hamburg where this was recorded.

Tone-wise, it's basically the companion piece to Get What You Deserve. The bass is pretty loud here, though the balance of the guitars is a little stronger than the studio album. But they also draw over a third of the set list from that album: "Jabba the Hut", "Jesus Screamer", "Eat Me!", "Die Stumme Ursel", "Erwachet!", "Silence is Consent", "Sodomized", "Gomorrah" and "Freaks of Nature" are all present, which is not really ideal for the old school Sodomaniac, but makes sense since the drummer was new to the band and they probably wanted to play a lot of the material he had helped execute in the studio. The rest of the set is divided pretty equally among older recordings: "One Step Over the Line" from Tapping the Vein; "Aber Bitte Mit Sahne" and "Abuse" from the Aber Bitte Mit Sahne single; "Stalinorgel", "Tarred and Feathered" and "An Eye for an Eye" from Better Off Dead; and Agent Orange is paid special attention with four cuts: "Agent Orange", "Tired and Red", Remember the Fallen" and "Ausgebombt".

It's surprising to not see "Nuclear Winter", "Sodomy and Lust" or "The Saw is the Law" here, and Persecution Mania (their best album) completely ignored; but perhaps the band was tired of performing these, and that album's content was featured heavily on the prior live album. At any rate, there are also two unreleased studio tracks: "Fratricide" being an escalator of rampant, melodic thrash metal with better guitars than most on Get What You Deserve, despite the remaining prevalence of the bombed out, distorted bass; and "Gone to Glory" which is quite a nice punk thrash piece, though brief. For myself, these were more of a treat than the live stuff, even if neither is quite a classic Sodom track. Choosing favorites among the set is difficult. I'm drawn to the older material from Agent Orange, but doesn't sound quite so powerful or effective with this lineup, who are clearly more fixated on performing the more recent belligerent punk material that they were promoting.