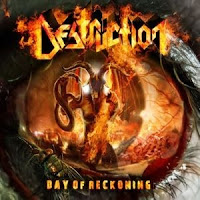 That well over 30 years into their existence, Destruction shows no obvious sign of aging or slowing down, is a testament to the band's authenticity and drive. They've taken their lumps, they've returned from the backlash of an entire decade, and they are still writing tunes that pound most thrash initiates into hamburger. Yet, despite the general quality of everything the band has released since Schmier and Mike reunited at the turn of the century, I have the sense that they peaked with The Antichrist and have simply been rewriting that album ever since. Whereas their 80s records marked a clear streak of evolution, through the roughness of Sentence of Death to the precision of Mad Butcher and fractured brilliance of Release from Agony; their past four efforts all inhabit the same plane.

As a result, Metal Discharge, Inventor of Evil and D.E.V.O.L.U.T.I.O.N. all lacked the distinction that the Germans destroyed us with in now legendary tracks like "Nailed to the Cross" and "Thrash 'Til Death", and Day of Reckoning is really just more of the same. Of course, this could be seen as a positive from certain standpoints. The mix of the instruments is once more ground into a meaty paste of perfection, with Sifringer's guitars and Schmier's snarling retorts sharing the spotlight of the butcher block evenly, and a rhythm section that can manhandle anyone else in the business. The lyrics and titles all carry that same sense of anger and velocity we could so appreciate from The Antichrist: "Hate is My Fuel", "Armageddonizer", and "Church of Disgust" just a few of the delicious morsels of maladjustment. But though they've laid out all the expected bricks for another rowdy crowd pummeling, the ultimate structure is one that can only weather the most common of storms, and not the blazing ravages of time.

It's a Destruction album without Thomas Rosenmerkel, and that equates to their being at least some noteworthy content, even if it's not about to challenge an "Eternal Band" or "Curse the Gods" for the career highlight reel. "Armageddonizer" is low-down and angry, especially the vocals through the minor twists and grooves. "Day of Reckoning" itself opens with some tasty Sifringer excess, blinding melodies trailing off into the sinister radioactive waste-scape. "Sorcerer of Black Magic" stands as perhaps the most interesting writing on the album, with great vocal effects and a cautiously built into segment that continues to rise like a warhead, thick riffing and latest drummer Vaaver's kicks like hammers of judgment pounding in the skull of the listener. "The Demon is God" and "Sheep of the Regime" both have their share of gladiatorial riffing and vexed insights, and at the risk of charges of metal heresy, I enjoy the cover of Dio's "Stand Up and Shout" just as much if not more than the Holy Diver original...especially the brief lead.

In the end, here is another case where they've done just about everything right, except breach the memory with their songwriting. Any individual track here would integrate fluidly with their material of the past decade at live shows, and yet I'm not sure many of the tracks would last long in a classic Destruction set list. It's a stronger album than the latest from Teutonic fellows Tankard or Sodom, and it'll sound great blasting out of headsets, car stereos or home rigs alike, but I didn't really find myself mouthing any of its riffs or vocals even after a number of listens. Day of Reckoning is good. The trio still sounds as enthusiastic and menacing as they did at any point in the last decade, and I'd take this any day over 90% of the new thrash being released by new acts, but I'll just have to keep my horns crossed for something more compelling to come.