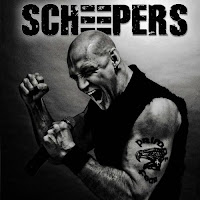 I've long been a pretty big fan of Ralf Scheepers through his work with Gamma Ray and Primal Fear, though I feel the latter has been suffering of late from a dilution in purpose and quality. I heard some time ago that he was working on a solo effort, so I was a little surprised that, for the most part, the Scheepers album is so similar to his work in those bands. There's less hesitation here to break out into a tangent, granted, and so the material written for this is more varied than any particular album he's fronted in the past, but most is traditional heavy/power metal that reflects the past three Primal Fear efforts with a whole host of famous guests backing the shrieker though his emotional highs and lows.

Mat Sinner, Magnus Karlsson, Tim 'Ripper' Owens', Victor Smolski (Rage), Kai Hansen, and Metal Mike Chlasciak are just a few of the guests/session musicians here, but they don't offer a stamp of individual personality. Most of the tracks, like "Locked in the Dungeon", "Remission of Sin", "Doomsday", "Dynasty" and "Play with Fire" all seem like outtakes that might have been used on a Primal Fear effort, only with the exception of the latter, which might have fit snugly on Nuclear Fire, they're all fairly underwhelming. The tones seem a little more organic, and so does Scheepers himself, yet despite an honest attempt, some good leads and the general quality of the vocal presence, there's nothing here I'd want to hear over Sigh No More, Black Sun, or even the more pop-driven, accessible New Religion.

A small selection of tracks are more epic in nature, like "The Fall" with its choir, the cheese-glazed ballad "Before the Dawn", or the pure, Accept/Judas Priest rock & roll worship of "Saint of Rock", and all are handled well enough, but in the end even these don't burrow themselves deep into your memory. However, Scheepers at least gives us a glimpse here of his potential versatility. There's also a folksy, shanty-like track called "Compassions" which is corny, but interesting. In fact, I dare say that I wouldn't mind hearing Ralf sing outside of his usual metal scope, but the mix of songs here just seem like odds and ends and have very little cohesiveness as an album; not enough in common to hook you and reel you into the celebrity guest-boat. At its best, you get something you'd already expect from his primary band, and at worst, you get "Cyberfreak".