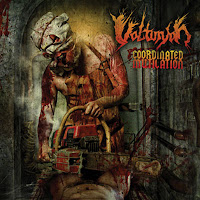 If you enjoy the George Corpsegrinder era of Cannibal Corpse, or the great Dutch band Severe Torture, than I can wholeheartedly recommend the sophomore outing of Sweden's Volturyon with open praise, because it scratches the same itch you'd expect from such artists. Varied tempos, dense semi-technical riffing and brutal vocals that shift from the expectant grunted bluster to a snarled decay. Coordinated Mutilation is a sliver more dedicated and more brighter toned than its predecessor Blood Cure, and the title is only too fitting, because this is one group of men who tightly execute their various instruments with mirth and glee, so much that it's impossible not to get caught up in the enthusiastic butchery on display.

No time is spent fucking off, as "Bloodsoaked Solution" immediately embarks on a hustling slew of rhythms that recall Gallery of Suicide/Bloodthirst-era Cannibal Corpse. In other words, it's pretty awesome, if derivative. "Savage Gluttony" answers with a perkier, choppy structure that continues to barrel forward with thrashing, twisting force. From this point on, the level of excitement on the album curbs a little, but only because the band experiment at different tempos, like the swerving trudge/groove of "Euphoria Through Execution" and the title track, both of which are still quite well built. Deeper yet, there is the even deeper groove of "Sadistic Molestation" and the mighty closer "Intense Convulsions" which much rank among my faves on this album, both intensely fashioned with precision chugging, squealing riffs that fondly rekindle a lust for old school, technical death metal.

The mix and mastering of Coordinated Mutilation is clean enough to sate the modern death metal fanatic, at the risk of alienating those that hate the style, but it's level and professional, with the drums really popping out at you and the guitars incredibly balanced. Unlike most of their Swedish peers, you'll hear almost no influence from the godfathers (by now grandfathers) of that scene, just very Americanized brutality with a hint of the Dutch greats (Pestilence, Sinister and so forth). No, this is more in the vein of peers like Spawn of Possession, Visceral Bleeding or Deranged, if not as technical as the former two or blunt as the latter. The content here isn't exactly 'ace', that is not wholly memorable, but it's easily enough recommended if you enjoy US bands like Suffocation or Cannibal Corpse, or perhaps even the new wave of Californian death metal that garners similar interests to the next level of extremity.