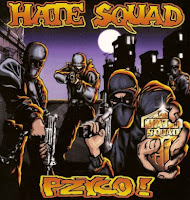 I hate to sound superficial, but the graffiti logo and title found on Hate Squad's third album were a huge turnoff to me. Nothing could be less appealing than ghetto metal, bad rapcore, or gangsta urbanization, but despite the riot cops, this image reeks of all three. Not to mention, the title: Pzyco! Hadn't Suicidal Tendencies' Mike Muir already profaned us with his own misspelling of the word!? Well, fortunately the audio content here greatly surpasses the poor choice in aesthetics, and we're given another straight up groove/thrash metal much like the prior, I.Q. Zero, which had been acceptable if entirely forgettable. If anything, Pzyco! contributes some slight variations on their theme with filtered vocals and other atmospheric modernizations.

"Who Dares Wins" is a slew of layman chugging and dire lyrical flourishes, with an unexpected gravitas to the chorus due to the effects. With the exception of the chorus chords, the guitars are incredibly cheesy and simplistic, but due to the overall composition, it's not a complete waste. "Freedom Speaks" lavishes its generic, opening groove riff with some light synths, then proceeds to cycle into some of the Burton Bell-like, atmospheric vocals. Very Fear Factory, to tell you the truth, only more street. And this is about as much as you can hope for from the rest of this album, with a lot of mediocre meathead swagger in the riffs of "Mission Done", "Synthetic Twins" and "Pzyco!" itself. There are a few exceptions in the almost pure hardcore of "B.T.C. 97" or the tranquil inauguration to "Just a Dream", but neither is any good.

Hate Squad were certainly trying to adapt the formula from the previous album to something more modern and, dare I say 'progressive', but the process flounders thanks to the weak writing. The guitar riffs on I.Q. Zero were simply better than these, no matter how lacking they seemed in general ambition. I would not at all be opposed to some dystopian street/groove if it were given the thematic consistency, interesting lyrics and powerful if primal bombast of something with equivalent quality to Sepultura's Chaos A.D. (obviously another influence here), but the Germans fail to make the essential connections in both riffs and chorus. The slicing production isn't all that bad here, but the lyrics and music are weak, and ultimately this about as much durability as the band's 1994 debut Theater of Hate. Which is not a compliment. I'll also note that this is the final Hate Squad album for G.U.N. records, and their last for 7 years, so there was undoubtedly some shifting about, some restlessness in the band after such underwhelming output.