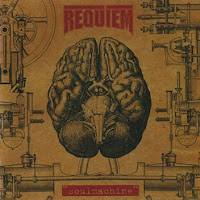 Requiem were another of those thrash metal anomalies in the mid 90s that incorporated a lot of funk and rock elements into their mix to much dismay, because they were effective in none of them. This isn't the outright flippant funk of say, Infectious Grooves, but they do share some traits in common with another band that was on the obscure Shark Records: the Deaf Indians, in the brief time that they existed. This band is a little less ballsy, and in fact a little cleaner sounding, with different vocals, but just as much compositional folly that makes Soulmachine rather an embarrassment as their sole full-length artistic statement. Once more we have an example of variation and innovation becoming worthless in the bands of poor songwriters.

The vocals here are probably the stinkiest aspect of its failings, sounding like a mix of Faith No More's Mike Patton (his silken smooth tones and barking both) and GWAR's Oderus Urungus (his haughtiness and timing). They also use some backing female vocals, briefly, which, while unique here, do them no service. The thrash guitars are very simple, poppy patterns, polished down to sterility much like nails that have been filed to prevent any effective clawing. At best, a song like "Vaccuum Room" or "Close to Da Thang" will pick up the pace enough to create an illusion of worthwhile momentum, and then deflate due to the shitty vocals. Now, I've got no problem if a band can mix metal and funk properly, or really anything and metal properly, but this album is limp on arrival, often too distracted with its Cream or Zeppelin like guitar patterns ("Inside My Dreams") and hippy musings ("Close to Da Thang") to realize that its gimping all of its aggressive components completely.

I mean, the best part of the album is the Eastern, ethnic bridge deep within "Inside My Dreams", and that sounds like a wholly different musical entity. Perhaps they should have stuck with their krautrock inspired jamming rather than attempt to enter the thrash realm, because Soulmachine is really the sort of album that baffles the listener. Not in a good way, but in a 'what were they thinking way?'. There are a few tight leads here, and the production is prim and proper like any 90s pop or hard rock record, but the ideas the band are exploring never manifest into anything beyond annoyance. I mean, this is no Angel Dust. You will not remember a single song here, and the awkward lyrics don't have the same clever impact that made Patton so special during that band's prime. This is just a band trying something different and blowing at it, and you wouldn't want to confuse them with the other 20 or so bands named Requiem, most of whom could produce gaseous emanations that are more memorable than Soulmachine.