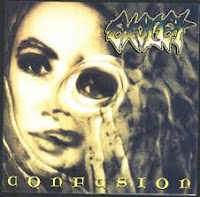 Another of those relatively obscure German death/thrash outfits, Exocet had been biding their time since 1989, slowly honing their material with an edge of guttural menace as they awaited their chance in the spotlight. Well, some years after, the band was signed to Massacre Records on which they released their sole full-length, Confusion, but the album went by relatively unheard, whether due to a lack of promotion of the sad fact that most metal fans in the mid-90s were probably not all that interested in such a hybrid. There were a few exceptions, sure, but thrash had largely kicked the bucket; and death metal fans were either demanding an increasing level of technicality which Exocet do not possess, or turning towards the melodic strains that were beginning to erupt from Sweden.

But this is not a bad album. Not at all. The production is quite blunt and pristine, with thick guitars that are not afraid to venture off into melodies where it suits them. The material reminds me of a mix of pure US thrash influence with the early death metal taint of Death, Pestilence, Obituary, Creepmime or Asphyx, and even though their riffs are rarely worth raising the hackles to, the mix of bludgeoning precision and Dirk Mylius' straight up grunting functions as intended. By far the best songs here are those that incorporate melody into their structure, namely "The Martyr" with its weaving, sorrow inducing guitar lines that transform into unadulterated, simple thrash. Faster paced tracks like "Chemical Profit War", "In Hate" and "My Nuclear Safety" all have their moments, but the band's 'soft side' seems to always upstage the malignity of their artillery, as in the melodic, grooving "Unborn".

Confusion does, unfortunately, play it a little too close to the hilt, and the songs are rarely wild enough to catch the fire of the imagination, preferring instead to operate with sterile structures and rather lacking transitions. That is to say: fans of the bands I name dropped above would probably listen through it once or twice, nod to themselves 'hmm' and the forget what they've heard not long after. Why, the band itself didn't feel much impetus to continue its career, so this was all we would hear of Exocet, and like the French missile it was named for, they were swiftly dispatched and decommissioned.