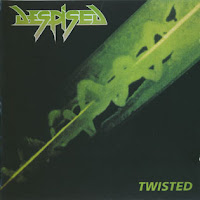 Despised were a fairly unknown band even at the best of times, but they did have some connections to Holy Moses, who were also a part of the West Virginia Records roster at one point. Andy Classen actually recorded this album, and a few of the members would go on to play in Temple of the Absurd with Sabina Classen. But as for Twisted itself, the band's sole full-length release, I feel the obscurity was all too justified: this is a fairly sodden affair of mediocre thrash metal with nothing to do for it but a few average riffs. The band had already been kicking around through the late 80s and turn of the decade with a bunch of demos, but were only able to pull themselves together at the last moment, to cast a faint shadow on an already dwindling scene and style.

Twisted is not terrible, mind you, but it's got zero worth recommending. This is the sort of balls heavy, muscled and meaty thrash that was arriving in the 90s to run parallel to the groove and death takeover of the crowd's attentions, but even there it neglects to really present itself as more than a middling slew of riffs underpinning the 'tough' and angry vocals of Tobias Gloge. A better thrash band could write an album like this while just warming up, or while reading a newspaper while relieving themselves on the head. It's tight enough, but not until songs like "Thirty Weeks" and "Unveiling Hatred" are there guitars even worth a gander, and these are still underwhelming. "Father to Son" sounds like the bastard of a union between Destruction's "Curse the Gods" and Pantera's "Mouth for War", and that's not a compliment.

The mix here is very crunchy and ballistic, a good ballast for Gloge's monotonous delivery, as gruff and vexed as it might seem. The rhythm section is lock step tight, but considering the general simplicity of the tunes, I'm not sure this is some mean feat. There were worse bands putting out albums, granted, but Twisted is wholly uninspiring, and at a time when bands of this sort would only survive by standing and delivering something truly special, it was incredibly unlikely to make any mark. Listening back on it many years later, it offers no tangible nostalgia even through its Classen production, and it sinks all too easily into the past.