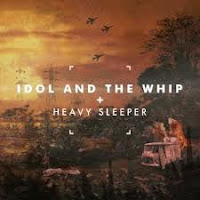 Though I've not heard Idol and the Whip's debut Revelator from 2007, I've been exposed to their former band Supercontinent's Vaalbara, a crafty piece of atmospheric sludge managing to eschew many of the boring tropes of the genre. Idol and the Whip itself features three members of Supercontinent, and it's a decidedly more 'fun' project, sort of a mix of heavy stoner groove roasted in metallic elements; a midpoint between Foo Fighters and High on Fire, if you will. Massive guitar hooks, aggressive vocals and a surprising level of melodic awareness are the primary characteristics of Heavy Sleeper, and it succeeds in rocking the face off far more often than it doesn't. Far more.

Most of the tracks are kept short and to the point, and very near all of them are catchy as hell, beginning with the instrumental "Future Eyes", a surge of big, swerving chords and traditional dual melodies that pump the listener's expectations before the ballsy, fluid rush of "Wasteland Battle Hymn" which is like desert rock cranked to 11, so thick it almost trips over itself. Others that I completely lost myself to include "Grasscutter" and "Broken Crown" for their monstrous grooves and amazing vocal layering over the guitars; the angry and choppy "Ley Lines", the peppy melodies and basslines of "Nocturne", and the forceful sludge of "Watery Grave". The closer "Calling Down the Dark" is also a pretty sweet joint, like a more rock & roll alternative to Neurosis. Probably the only cut here that slightly missed the mark was the lengthy "Augur", in which the riffs were simply too boring, similar aesthetics being channeled more fluently through "Artery" or "Heavy Sleeper" itself.

The mix of the album is quite good, with thick and juicy guitars that make all the difference, tribal rock drumming and Chris Plumb's lyrical delivery which is reminiscent of bands as wide as Tad, High on Fire, Clutch and Neurosis. I had a lot of fun listening through this, probably more fun than Supercontinent, which is now apparently defunct. It's truly a surprise that this band hasn't been snapped up yet, they've got an accessible element to their music that would cross over to a variety of scenes, from the stoner sect to the sludge mavens to the more mainstream rock crowd. Heavy Sleeper already sounds as professional as something like this is going to get, so labels should certainly take note, as they might have the next sensation at their very fingertips. An entertaining sophomore and easily recommended to fans of anything I've name dropped in this review, or The Sword. What's even more amazing, the album is available for free from the band's site, with an option to donate a buck for higher quality. Jump on it.