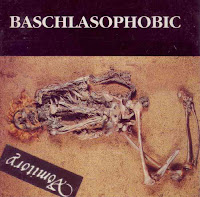 The curse of bad aesthetic choices for cover images was not confined to just Baschlasophobic, because the debut of Hour of Truth was not quite a sight itself. However, this sophomore album is truly ugly, from the title to the supine skeleton lying near the inverse, doormat style logo. Alas, the cover of this book is not the only aspect to be judged hideous, because the musical content is at best inconsistent. Vomitory were a band very capable of writing riffs, and in fact, there are at least a dozen or so on the album that deserve some merit. The band could probably have been a contender with a little more focus, because the dense cookie monster vocals of Detlef Sayk were suitably entertaining and barbaric.

"Warchild" opens with a manic frenzy of tautly woven speed/thrash lines, bristling with the fuzz of the guitar tones. But then something sad happens at 1:40, and the band breaks out into this horrible funk segment, like they wanted to pay tribute to Infectious Grooves. A terrible choice, especially when Detlef starts rapping over it. I'm not one to automatically hate a mix of rap and metal, mind you, but it has its place, and that place is not to shit all over what otherwise might have been a decent song. There are a lot of segues like this on the album, that take one out of the action, as in the clean guitar and bluesy breakdown in "Free from Hair and Brain", but at least most of them convey half decent writing. In "A Little Song About Dying", the band drops almost all metallic impulses for an extended, atmosphere acoustic track, raging only at the very end.

The fugly funk returns for "One Step to the Abyss", if only for the intro, and then it turns into a rather raging, spastic tech/thrash song with a psychedelic breakaway. There are a few decent, purely aggressive tunes here like "Prophecy" and "Pornos in the Parsonage", but they serve only to make me sadder about the band's misguided potential. The closing track, "Tribute", with its rock & roll interface, is just terrible. Vomitory was intricate enough to write something far better than this, but they seemed to just disperse their ambitions. Maybe they thought the funk parts were funny, but in retrospect this was just the dying breath of a jaded age, because funk metal itself was an all too slippery trend. Baschlasophobic is a wasted effort from a band who could have easily trumped their debut Hour of Truth with a bit of effort.