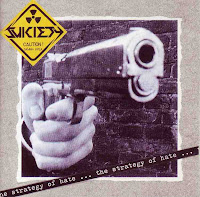 I'm going to assume that this German band derived their name from the Milwaukee band Realm, who had released their sophomore effort Suiciety already by 1990, when this one was formed. It's a cool name though, and was bound to be snapped up by someone, so why not keep it in the thrash family? Unfortunately, the band's music does not seem so inspired from the same source, and this is just beefy, average thrash with decent production and some slight tints at the clinical, tech riffing of their German forebears. The vocalist, Jörg Holzhauer, has a pretty interesting tone, sounding as if he were in great pain or severely constipated. It's a bit over the top, but I'll give it the benefit of at least constituting some amusement.

Otherwise, expect some street thrash which is like one non stop mosh, plenty of cussing and anger to ball your fist. In fact, there is just too much cussing in a song like "Face the Facts", to the detriment of any ability to enjoy it. The primary riffs in most of the songs are far more similar to a mix of Anthrax, Exodus and Pantera than the local German heroes like Sodom or Destruction, and there are plenty of gang shouts and primitive, headbanging motives behind tracks like "The Harder They Fall", "Brother Hate - Sister Pain" and "Home Video Target Range", apparently a rally against reality TV. There are quite a few tracks here that surpass the 6 minute mark, and these generally coincide with the more interesting compositions, usually opening with a half-decent, surgical melody and then devolving into steadfast but blunt riffs and enormous bass lines.

Suiciety did not entirely lack the capacity for coming up with a good riff, but the ratio of boring to quality is just overwhelming, and there is very little to distinguish this style from that of hundreds of others hopefuls that missed the train 6-7 years prior to The Strategy of Hate's release. I personally find Holzhauer's style to be fun, but the lyrics aren't very good and the music is not a strong enough support column to enforce the unintentional charisma. In the end, this is yet another victim of the great 90s purge. No wonder thrash fell out of favor, when so many bands like this were content to merely rest on the genre's laurels than push them wide and far (a task that was apparently left to the death and black metal bands).