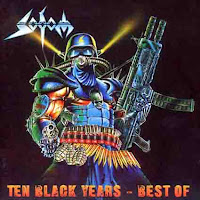 Any band with the success of Sodom is likely to have a phalanx of greedy record executives (or the band itself) chomping at the bit to put together a greatest hits package and make money off the same material they've already scored on, even if the process is disguised to appeal to 'new listeners' to the band. Let's be honest. This is not fucking Enya. The elderly were never, and will never in their blissful ignorance ever give two shits about a compilation of barbaric German thrash and punk. So who are we selling this too? Collectors? It's just a CD with repressed material. Fans? I hope they're smarter than this. Sodom had actually been around longer than ten years by 1996, but it was time for Steamhammer to roll out this collection and hopefully pad their earnings.

Ten Black Years - Best of Sodom is a mix of studio and live materials, but that's about all that distinguishes it from the criminality of the pure studio track compilation. There's a hell of a lot of the band's punkish, 90s material present here, not to mention their German titled faves off the older albums like "Ausgebombt" or "Bomhenhagel". It might have been nice to split the two styles a little more than they've done here, with all the punk solely on disc 2, but they're evenly distributed across both. That said, the track selection is pretty good, with the band's bigger numbers like "The Saw is the Law", "Agent Orange", "Nuclear Winter", and "Shellfire Defense" available in their studio incarnations. They also include some of the rarer bonus tracks from Marooned Live and various EPs the band put out through the 80s and 90s, so it might hold some value that you can essentially gather all of that in one place and in the end break even.

There are some covers scattered about here which the audience will have already heard from Tom and crew: "Iron Fist", "Aber Bitte Mit Sahne" and "1000 Days of Sodom", so it does seem like whoever put this together and decided on the 36 tracks and over 140 minutes of music, wanted to give the prospective buyer a nice cross section of all their material. So this is not necessarily the biggest ripoff out there, but still completely unnecessary for fans who have already purchased these albums (studio and live). Seriously, vote with your wallet and track down any of the band's first 6-7 albums if you don't own them. Better yet, buy them all. It's simply a better investment than a redundancy like this.