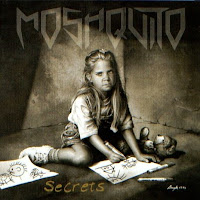 As was the case for a number of East German bands in the early to mid 80s, Moshquito (formerly known as Argus) were hampered by their political climate, and thus were unable to produce much more than a few demos before the wall came tumbling down. But after disbanding for a number of years, they decided not to abandon their dream of entering the thrash arena, finally doing so with Secrets in 1998. What surprises me, though is that for one arriving so late to the game, deep in the thrash void of the latter 90s, the band does not attempt to simply present that earlier incarnation of themselves like some old high school football glory...and Secrets sounded current and modern.

This is not a heavily German-influenced thrash album, but reminds me somewhat of perhaps the aggression of Pantera or Sacred Reich with a meaty, punched-out guitar tone and tendency to swerve into terrain more complex. "Out of Sight, Out of Mind" had my hopes up, with a fine acoustic intro that someone like Paradox would have written, and then some half decent if ultimately unmemorable riffing. "The Damned" also has a ridge of clinical melody in its opening volley that recalled the influence of tech thrashing, but this too doesn't pan out into anything impressive. Some of the better riffs are found nestled in "Mutant Heroes", "No Return (To Inferno)", and even the big grooves in "Greedy Eyes" or "You Want to Live", and the vocals, while nowhere near perfect, are thick and effectively vexed. Moshquito is also not afraid to pace themselves with clean guitar segments, or a fun cover (Hendrix' "Purple Haze").

They deserve some credit, for sticking to their thrash guns. You'll find a few groovy rhythms and breakdowns, but nothing on the level of so much waste being spewed forth during that damp decade of decay. They also seem to have this forward looking tone, some modernization that they've married to their 80s influences. However, there is ultimately just not enough quality music here to recommend the debut. If one could compact all of the better riffs down to 2-3 tracks, you'd have a half-decent EP worth. But so much of this material is underwhelming, with no choruses of note, nor outbreaks of vital energy so essential to the classics of this genre. It's great that there were bands willing to perform real thrash without any real agenda or concerns for its viability, but like a peacock dowsed in river mud, Moshquito just didn't have the aural plumage to attract the ears of potential mates.