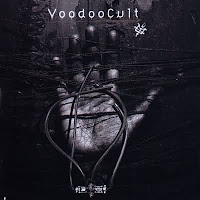 It's pretty ironic that Philip Boa's Voodoocult increased in quality once he switched to a lower-key lineup on the project's self-titled sophomore album, and yet that is exactly what happened. Gone from the roster were the huge names of Chuck Schuldiner, Mille Petrozza and Dave Lombardo, but bassist Dave Ball and Cro-Mags guitar player Gabbay Aubalarach would remain for the time being, and Boa was able to recruit a few more into his fold: most impressive, Jim Martin of Faith No More, whose steady, simple thrashing tone is all over this damned album, for better or worse. Also joining here was drummer Markus Freiwald, who has played in Despair and Sodom to name a few. He might not hit like Lombardo, but Dave was not even remotely impressive on Jesus Killing Machine, so one could honestly consider Freiwald an improvement.

Essentially, Voodoocult bordered on the status of an 'actual band' here, and less a circus of stars that was likely being exploited to sell a few records. But there's still a major hurdle: the ridiculous and inconsistent songwriting. And an astronomical hurdle: Philip Boa himself. His vocals are a little less grating and acidic here, but he's instead subdued and lazy sounding, and the lyrics and titles have only marginally improved to fare like "Welcome to a New Season of Deathwish", "Death of a Kung Fu Fighter" and "King of the Beautiful Cockroach". It almost feels as if to accommodate Jim Martin, he decided to make the material stranger and more 'artsy'. But there are some decent riffs, like the meaty industrial thrash of "I Close My Eyes Before I Bleed to Death" in which Boa at least sings the chorus with an ethereal aesthetic, or "Welcome to A New Season of Deathwish", where Martin and Aubalarach shine off on some groovy thrash.

But these moments are few, and vastly outnumbered by the crap that clings to the arse of this man's ambitions. Tracks like "The Stranger" and "Egomania" are ridden with bad rock grooves and worse vocals, and there are some vapid, disposable straight metal razors like "Exorcized by a Kiss" and the bonus track "Electrified Scum". Voodoocult experiments a lot more than its predecessor, with Boa clearly attempting to incorporate sleaze metal and industrial akin to what bands like Mind Bomb and KMFDM were doing successfully. The projct still sucked, and remained a waste of time and talent for the guest musicians, but it almost felt like there were an actual direction here beyond 'let's get some famous friends and make a band'. It is not an experience I'd recommend to anyone, but it's certainly impinges on the tastes less than the stunningly awful debut.