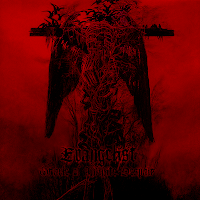 Though the prolific output of Benighted in Sodom has been a task to keep up with of late, there is one common thread running through much of Matron Thorn's work: the atmosphere. Each release has manifest with some transient, often grating pallor that adds much to the experience. This quality is also carried into the man's other projects, like the spacey black metal of Andacht. Now, collaborating with vocalist Ascaris, Thorn has tested the waters of the death metal genre, to much the same effect. Oracles of Infinite Despair is simply a teaser, three tracks paving the grave soils of a wider ambition, but considering the current climate of death metal, in which new artists marry the nostalgia of the old guard with enhanced, atmospheric mechanics, I feel Evangelist might be his most potent evocation yet.

I've brought up the term 'cavernous' a number of times in my exploits, and certainly the term is accurate to describe the sounds of newcomers Vasaeleth, Denial or Innumerable Forms. But in the context of Evangelist, it is taken to extremes, and beautifully so; a haunting sheen of ambiance is omnipresent on this recording, affixed to the brutal drudging of the down-tuned guitars and guttural, spacious vocals. It works wonders on the psyche, dragging the listener into a loathsome configuration, evasive of all hope and light, a crypt of tangible, ominous vapors that slowly sap at the sanity of the living. "Funeral Monolith" opens with a wash of synthesizers that morphs directly into the crushing weight of the interior guitars, so dense that one gets the impression that Incantation, Disembowelment and Godflesh are jamming together while Raison d'Etre DJs obscure ambiance above the fray. "Blood & Darkness" seems somehow more mechanical, more freakish, like a carnival of blind subterranean refugees that worship a factory above, and this track incorporates a more directly old school, muted riffing sequence.

Lastly comes "Pendulum", another holistic drudge whose atmosphere seems closer to that of a choir of lost angels drifting among the peat bogs of antiquity. Beautiful and carnal in conjunction, but perhaps a sliver more repetitious than the others, it does beg the question: without the samples and ambient noise placed at the mast of this release, would it be as interesting? I cannot honestly say, for the riffs themselves seem more of a caged monstrosity feasting upon some ghastly carnage, lurching and snorting its derision at its captors. They're more an act of tumult and percussion than a series of notes made to be distinguishable unto itself. But the beauty is that they're not alone. The two polar forces here combine for true, disturbing gravity, and Oracles of Infinite Despair is the sort of atmospheric death metal that I simply don't seem to grow tired of. It will be interesting to hear if a further, long form release can capture the same nightmare-stuff with more variation, but this is an excellent initiation ritual, a haggard hazing of horror.