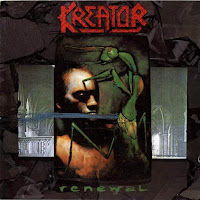 Perhaps it was my disappointment that it wasn't Coma of Souls II, but Renewal is an album I disliked for several years. Can I think back and unearth any other reason? Probably not, but everyone has a change of heart over something, and this would be one of mine. Renewal is the first in what many consider Kreator's 'experimental phase', a streak of efforts in the 90s upon which the band tried to reinvent and reassert themselves into the shifting medium of the metal realm, like the rest of their peers. Who could forget the abomination known as Neo-Destruction? Or Tom Angelripper's decision to punk it the fuck up with Sodom until he finally realized he should make a second band for that? Or Metallica becoming Creed?

By comparison, you have to admit that Mille Petrozza and crew let us off easy. Endorama and Cause for Conflict were certainly lacking, but their other side treks offered something unique. This album doesn't abandon thrash, it drags down into the fundamentals of the band's sound and glazes it with a depressive, sodden majesty ripe with quasi-industrial elements. Gone are the superb, intricate riffing sequences that dominated Coma of Souls, the go-to chorus sequences and the blistering speed. Renewal is a work of dark atmosphere, sociopolitical questions and expansive experimentation. The lineup remained the same, which is difficult to believe since almost everything but the vocals here sounds almost like another band entirely, so that leads me to believe that the entire group were on the same page as far as forging a departure from their earlier works. But at its heart, you can still hear the pulsing energy of the band's parent genre.

This is evident once you get into the bridge sections of "Winter Martyrium", a track that opens with an escalating slew of glorious sewer chords that cede into an almost hardcore charge in the verse. Around 1:30, you can hear the introduction of a brief, traditional Kreator style riff which might have sounded right at home in the Terrible Certainty environment. "Renewal" once again assumes a non-traditional intro, dense industrial rock, but it quickly transforms into this Slayer like, unforgettable riff sequence which is one of the heaviest and most effective the band have written to date. The bridge and chorus create a groove that morphs straight back into the song's dominant riff, and it's one of the best tracks on the album. "Reflection" diverges further, Mille whispering along some eerie guitars until the Prong-like industrial metal pulse of the verse arrives. "Brainseed" in contrast, is a surge of bombastic glory with a meaty and incredible riff that leads into the mosh starved breakdown, all cast in percussive noise elements.

It gets even more interesting with the doom laden elegy "Karmic Wheel". Once again, denser than expected riffing and Mille's clear barks create this intense, oppressive atmosphere, tribal drums and truly depressing lyrics. Another highlight for the reel. "Realitätskontrolle" is sheer industrial indulgence; "Zero to None" a thick, thrashing brigade with excessively crunchy tone and another central riff to die for, with perhaps a spark of the hardcore foreshadowing of their 1997 effort Outcast; and "Europe After the Rain" a progressive stormer which cycles creepy, clean guitars and bleak lyrics into a hardcore/thrash blitz beneath the lead, though this is my least favorite track on the album. "Depression Unrest" closes the album with ambient rock that evolves into punchy, industrial chugging. My second least favorite here, but not bad.

Once in a while, it's good to be wrong, and I'm glad I've given this album more of a chance as the years rolled on. In fact, the weaker closing numbers aside, I feel like this belongs among the band's best works. I enjoy it more than any of the later 90s efforts, more than Endless Pain and Violent Revolution, and lyrically it's quite interesting. The better tracks here are able to offer a glimpse into some post-industrial, dystopian world on the edge of a breakdown, titillating enough that you might want to live there, despite the smoggy skies and meager rations of sustenance that the survivors squabble over. Give it a chance; or if you, like myself, were initially dismissive of its curious evolution, give it another.