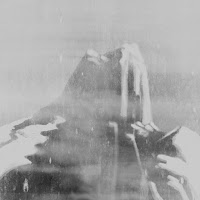 Though I often stumble over the complexities of swollen vocabulary and glib tongue, I am at heart a simpleton. When I see a mountain crest shrouded in ice and snow adorning the cover of a black metal recording, then I expect the music to freeze my spirit to a fault. I say this with bearing to Aurvandil's Ferd EP, because this is a musician that knows and revels in cold. You might not hear it at first, because this is the cold of antiquity, basked in a glorious sunlight rather than a shadowed, leeching abyss, but the compositions here beat like the blue and white wintry heart of a frost titan, storming and significant and immortal.

The concept of this French artist is simple, and one we've all seen and heard before: a single musician, with a guitar and synthesizer, left only to the constraints of his own imagination. It's an equation I never seem to tire of, and perhaps one of the most honest and base expressions in music. The guitars are straight black metal that can trace its roots to the early annals of ravenous Norse veterans like Enslaved, Burzum, and Transilvanian Hunger era Darkthrone, but the subtle glints of melodies and synthesizers placed easily through the driving, straight razor rhythms feel like blankets of inevitable, virgin snow that alight upon your scalp from the torn, gray sky. "Over the Seven Mountains" and "Still He Walks" are the two tracks in particular that I enjoyed, easily filling out their 9 and 10 minute respective lengths with blazing egress as they stir the sleets of the past, each endowed with harrying blast beat segments and shifts into a slower, driven majesty.

The "Peregrination" bookends to this EP are also interesting, the first a lengthy folk guitar diatribe that gradually mesmerizes the listener before exploding, the latter cutting more swiftly to the glacial crash of its gleaming, desperate electric melodies. The central track, "Through Hordanes Land", was probably my least favorite of the five, though comparable in tone. I enjoyed the string intro and a handful of the riffs, but some of the repetition lost me as I was treading its depths. Otherwise, I have very few complaints about what I'm hearing. The beat programming might throw a few listeners off, but I've become incredibly acclimated to its sheer, hostile shadowing. Aurvandil promises nothing more or less than an icy excursion into myth, and if you've an inkling for early 90s authenticity in your black metal, Ferd is as vaunted and frigid as you are like to find in the underground, or anywhere for that matter.