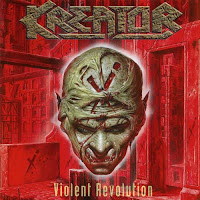 It's very amusing to imagine a Frankenstein scenario after the letdown of 1999's Endorama, with a village of crazed and belligerent thrash folk pursuing Mille Petrozza and his gang into a castle on the Bavarian landscape, pitchforks and torches calling out the death of the once-mighty Kreator. However, they were soon to get to work, set up the lightning attractors and kick some life into the patchwork corpse of ideas that brought them to prominence in the first place. Amusingly, there is still a lot of Endorama within Violent Revolution, a number of the songs incorporating the same pensive melodies, but they're cast in a more explosive thrash context that summoned some of that 1989-1990 technical riffing bliss and was also bound to appeal to the melodic death starved audience that was quite wide at the turn of the century.

With Tommy Vetterli (Coroner) departing the team, Sami Yli-Sirniö of the Finnish weirdos Waltari was brought in as replacement, and he's remained ever since (with both bands). I had always wanted to hear his guitars in a more straightforward metal context, and it turns out he's more than fluent, an excellent companion to Mille's composition. "Reconquering the Throne" spends a few minutes in a Coma of Souls but flexes its mellowed, melodic muscle during the bridge. I can't say it's the best opener, or the best song here, but at the very least it's a vortex of energetic and depressive riffing that smelled of better, younger days. "The Patriarch" is a dual guitar instrumental, and a catchy lead-in to the title track, which features stronger guitars that swerve about a solid emotional course and pure mid-paced thrashing verse. The chorus is predictable but it still makes you bang your head, and "All of the Same Blood" returns to the clinical, cynical speed of Coma of Souls, fairly close in composition to a "Hidden Dictator" or "Material World Paranoia".

A few of the tracks strike out on a more original course, like the warlike march of "Servant in Heaven - King in Hell" with its grueling verses and eruptions of glorious melody, or the morose and twisting river of "Bitter Sweet Revenge". However, almost without exception, I found all the album's best moments to come straight in the center of the disc. "Second Awakening" and "Ghetto War" are particularly well written, meshing together the classic Kreator staples of bombast and aggression with the emotional force that was so prevalent on their 1990 master work. Deeper in, "Mind on Fire" also deserves credit, its opening volley my favorite individual riff here, both swagger and mystique colliding with the brief insertions of leads. "Replicas of Life" serves as the "When the Surn Burns Red" of this album, clean guitars ceding into a slugfest of dire and melodic riffs, a decent if familiar concoction.

Violent Revolution was produced by Andy Sneap (ex-Sabbat), a man that knows a thing or two about speed and thrash metal, despite his less desirable credits, and it's incredibly professional sounding, with the same workmanlike clarity of their 1989-90 material, if not more vibrant. Unlike the last two albums, which were far simpler in structure, Mille Petrozza proves that he still has a fire lit under him, and the guitars are in particular the star of this show, both in tone and delivery, which has always been the modus operandi of this band. I actually enjoyed this album quite a lot when it was released, but in retrospect I believe this was largely due to the fact that the band had returned to the style I most wanted to hear them play. I still feel like Violent Revolution has 3-4 excellent tracks, but there are a number here that have no lasting impact whatsoever, and I cannot number it among their better career works. But it's a no-brainer that this is several steps above Endorama in quality.