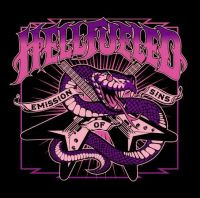 At this point, Hellfueled are in a pretty unique niche within the Swedish metal scene, perhaps even metal at large. With a sound that is equal parts stoner metal, Alice in Chains-like melodic grunge, and Ozzy Osbourne, you'd think they might come across as passe, but instead they explode speakers through their sheer intensity. This is a loud and energetic band with three albums already beneath the belts, including the superb Memories in Black from 2007 which I think is still sitting in my car. Emission of Sins is not quite the album that Memories in Black was, and there is a noted increase in commercial quality (with a mild, pop rock spin to a few of the later tracks), but it still rocks out, and actually develops in quality as you approach the middle tracks.

Andy Alkman is still wailing away with a wild Ozzy Osbourne, though he centers on a lower range than the Ozzman's Sabbath days. I am not kidding, I would love to hear Alkman perform a set with Iommi, Butler and Ward, or even Zakk Wylde. Maybe Ozzy himself could officially name him as replacement. But I digress. The vocals are a large part of what makes Hellfueled go go go, but the riffs of Jocke Lundgren are larger. They swerve, they crash and they groove, burning along with the heat of a hundred suns and the assurance that the listener will NOT be bored, ever, while listening to this band. Lonn and Svensson are as solid a rhythm section as you will find, their playing is infectious and allows the twin starlets of Alkman and Lundgren to shine.

First at bat is the groove and chug-a-long of "Where Angels Die", which seems to pick up directly where the preceding album ended. The chorus soars, especially the latter half with the guitars at about :53, but "Am I Blind" is far more memorable, with some excellent guitar work over which Alkman delivers some of his higher pitched wonders, though the chorus does feel a little dry with its predictable lyric. Brief samples of monks chanting ignite the lower grooving of "I'm the Crucifix". If you've ever wanted to here a remake of "We Die Young" but with Ozzy singing, this is as close as you might get. "A Remission of Sins" is an excellent song, with a beautiful verse riff, dirty blues metal and some nice tremolo hammering. It leads into a pretty catchy, radio-worthy hard rock chorus, and even the simplistic lead shines. "Save Me" and "Lost Forever" have some big, swaggering brickhouse rhythms akin to Pantera or Down, sans the annoying tough guy lyrics, and "For My Family and Satan" has a resonant Rush-like rhythm in the verse which mixes stunningly well with the vocals and heavier groove.

"In Anger" is a surprise because with the melodic guitars it kicks off almost like something Soilwork or In Flames would write, and yet it moves into this great verse with a thick bass plodding as the central instrumental. The chorus is highly melodic, infectious and it's one of the best tracks on the album. "End of the Road" continues this late surge of high memorability, with another nice radio friendly chorus segment. "Stone by Stone" moves at a high speed stoner pace, like Nebula jamming with Blue Öyster Cult, with a great lead, and the instrumental "Moving On" writes off the album like an anthem of bluesy power bliss, I could hear Steve Vai writing this song if he grew a pair.

Emission of Sins espouses the same rock solid production of its predecessors, and the band gleams in each lead, and pounds relentless with every concrete rhythm. The 'polished' and accessible grunge metal influence of bands like Alice in Chains and Soundgarden are evident, yet tempered in some traditional 80s metal music. Lundgren keeps it real interesting, and his riffs are ever a pleasure, fully able to transport you between dirty bar fighting rock 'n' roll and glorious segues of fantasy that lift you to higher planes. It's a jarring contrast at times, but he is certainly one of the more interesting Swedish guitar players in years. This album can't really live up to Memories in Black, because that album had 5-6 songs to absolutely die for. But it's nonetheless very good, any fan of the previous Hellfueled albums will slide right in.

Highlights: Am I Blind, For My Family and Satan, In Anger, End of the Road