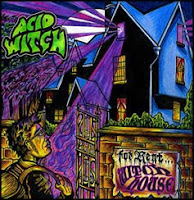 Michigan's Acid Witch have decided to keep the coven's menstrual flow consistent with a limited run 7" EP featuring two new tracks in 2009. If you enjoyed the thick, pea soup broth of their first album Witchtanic Hellucinations, then I can see no reason why you wouldn't track this down (if you can find it). Both these tracks are pretty great additions to the witchography, the rival of anything found on the debut.

"Witch House" itself is a slab of molten hot, haunting sludge which uses keyboards to conjure an old school horror atmosphere that simply should not exist post early-80s. I've long been waiting for a band to mix such sounds, as the normal garden variety sludge/doom is more often boring than not, and Acid Witch definitely deliver a pleasing pie crust of the macabre. "Worship the Worm" is a libation to the lovely little parasites that will feast upon us and return us to the earth, captured in a few total stoner moments as the guitars trudge towards into some freaky, wailing melodies that lead us out from the EP.

Witch House is short, sure, just enough to keep you entertained for about 8:30 minutes and change, plus the inevitable replays. The mix is downtrodden and somewhat raw, which is all too fitting for their music, and the band's horror camp smut schtick is kept intact. Another of Razorback's stable of quality acts, it seems likely Acid Witch could continue to grow into one of the hidden treasures of US doom. There should be another EP (Midnight Mass) kicking its way forth from the grave soon, and hopefully the new year brings a new full length album.