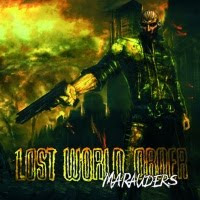 If you're a fan of the German black metal stylings of Geist, you may be interested to know that a few of its members are also involved in this modern thrash metal act. Marauders is the second offering from Lost World Order (LWO for short), and the band is actually offering it as a free download. And it's certainly worth checking out, because the band offers a modern spin on classic German and Bay Area thrash influences, with a dash of progression, melody and some pretty solid songwriting. There was never a point during Marauders at which I felt tired, even though the album as a whole did not knock me over for the full 42 minute duration. They achieve this by varying up the songs, with all manner of influences, rather than just the run and gun thrash/speed metal you might expect.

Vocalist Mat has a style in between later Mille of Kreator, and Tom Araya, but the riffs bounce everywhere from a charging thrash gallop to a slew of melodies. "21st Century Threat" offers an energetic opening, with some guitars that start at mid-period Exodus and end in super melodic breakdowns. "Marauders" rocks at a slower pace that reminds me of something from Kreator's Renewal, though the vocals are a little more vicious, and there is a little more groove to the guitars. "WWIII" is bombastic, and "Cannibals" is one of the best songs on the album, with fun lyrics and riffing that will have your neck hating you. Other high points are the descending dual melodies that open "Welcome to the Slaughterhouse", and the mad melodic grooving of "Go to Hell".

Marauders is a tight album which definitely provides a case for the musicianship and professional capabilities of these Germans. The mix is excellent, you can hear everything quite clearly, and the vocals and riffs are all pretty high grade. The songs are not extremely memorable, but they are better than a lot of other modern thrash I've heard, and a lot more loyal to their influences. Considering the band is giving this away...you should probably give it a listen.